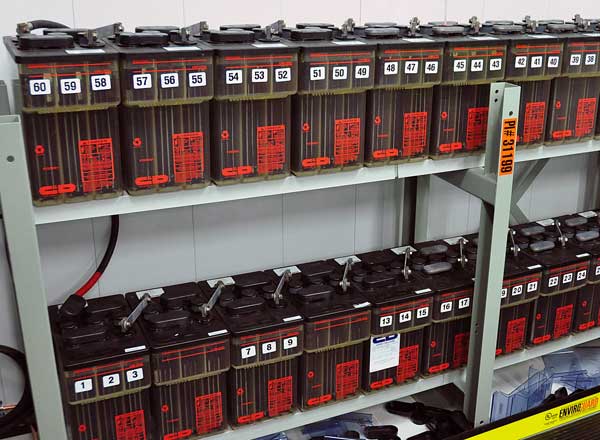 The main objective of a battery system is to provide standby and emergency power to critical equipment during an AC outage. Photo: Paul Chernlkhowsky (Flickr CC)

Batteries are complex chemical mechanisms. They are comprised of a number of cells connected in a series path. If any one component in a battery string fails, the entire series connection fails.

With so many applications and options for testing batteries, it’s hard know what the best testing scheme is. In this article, we will briefly discuss three quick (and effective) tests that will help identify abnormalities in the battery system, using simple testing and measurement equipment.

When using a hydrometer, the specific gravity of a cell should be taken a third of the way down the side of the cell. IEEE 450-2010 Section 5.2 recommends that specific gravity be measured on 10% of the cells in a battery string each quarter, and all cells be tested annually. 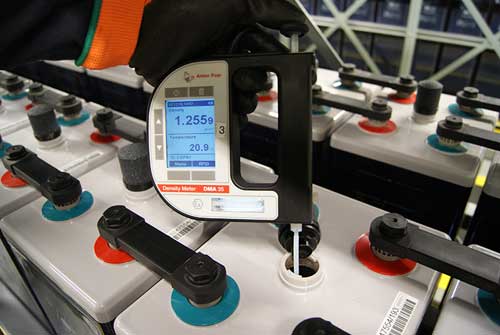 Specific gravity is measured using a hydrometer. Digital hydrometers like the one pictured above are the easiest way to obtain readings. Photo: BAE Canada.

Measurements are temperature dependent, meaning the specific gravity will vary depending on the temperature inside the batteries. Some testers will correct the values automatically, while others may require calculating values manually through an equation. Either way it is important to use temperature corrected values for accurate trending data.

Specific gravity is not traditionally known to provide much value in determining impending battery failure, as it only changes slightly after the first 3 to 6 months of a battery’s life. The initial change is caused by the completion of the formation process, where inactive paste material is activated by a complex bundle of chemical reactions.

WARNING: Battery electrolyte fluid contains sulfuric acid. Use extreme caution when working with these fluids, always wearing the appropriate PPE. Work should only be performed by qualified personnel.

Related: 4 Battery Hazards and How to Avoid Them

Measuring float voltage is one of the more traditional methods of testing a battery, but it’s important to understand that a correct cell voltage doesn’t indicate anything except that the cell is fully charged. Incorrect cell voltages do indicate, however, something about the condition of the cell.

Because the sum of all cell voltages must equal the battery charger setting, the lower voltage cells must be counteracted by overcharging the cells in better condition, which leads to higher operating temperatures.

Note: It is possible that one cell floats much higher to compensate for several cells floating a little low.

A low float voltage shows a cell that is not fully charging and cannot supply full capacity, which may be an indication of plate sulfation. A high float voltage is an indication of overcharging. This can lead to premature grid corrosion and higher temperatures in the battery, the worst culprit of shortened battery life.

Measurements should be made with the battery disconnected from the load and charging system in order to obtain most accurate readings. Use a multimeter set on DC voltage when taking your reading. Compare the values to the limits specified by the manufacturer.

Remember that abnormal float voltage indicates something is wrong. However, if the float voltage is normal, it says nothing about the state-of-cell, capacity, or state-of-health. IEEE 450 Section 5.2 recommends float voltage be measured monthly, while each cell is measured on a quarterly basis.

Many times batteries fail, not because of weak cells, but due to weak intercell connections. Generally, hardware should be tightened to the low end of the torque scale that is recommended by the battery manufacturer but its far better to validate intercell connection resistance using a low-resistance ohmmeter. 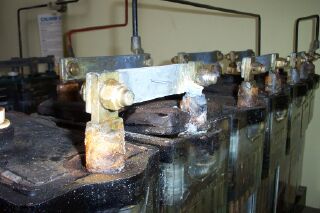 By following IEEE Recommended Practices, electrical measurements can even find errors often overlooked, such as a washer stuck between the post and an intercell connection, whereas torqueing will not.

On multiple-post cells, measurements should be made straight across both connections, and then diagonally to check for balance in the cell and connections. Measuring only straight across does not adequately test the cell due to the parallel circuits for the current.