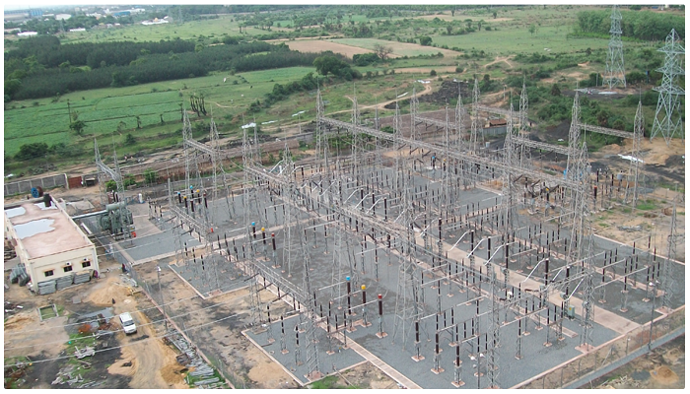 A substation bus scheme is the arrangement of overhead bus bar and associated switching equipment (circuit breakers and isolators) in a substation. The operational flexibility and reliability of the substation greatly depends upon the bus scheme.

Clearly, a EHV or UHV transmission substation where a large number of critical lines terminate is extremely important, and the substation should be designed to avoid total failure and interruption of minimum numbers of circuits.

There are six common substation bus schemes that every test technician should understand: 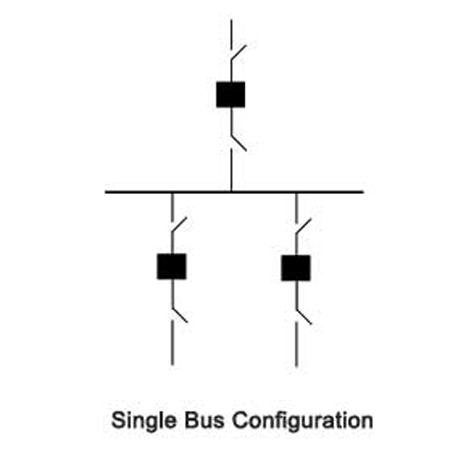 The single bus substation configuration is the simplest and least expensive of all configurations. This configuration requires less installation area and it can be easily expanded.

Single bus configurations are not considered reliable systems and they should only be implemented in substations where high reliability is not required, such as large transmission yards. Reliability and availability of this system can be improved by expanding and sectionalizing the bus.

The circuit breaker to be maintained is now opened, isolated and removed for maintenance. The circuit under maintenance is transferred to the transfer bus.

In the main and transfer bus configuration, the protective relay scheme is quite complex due to the requirement of the tie breaker to handle each situation for maintenance of any other circuit breaker. This bus scheme is more costly than the single bus configuration but is more reliable and can be easily expanded.

The switching procedure is complicated for maintenance of any circuit breaker. Failure of a breaker or fault on the bus results in an outage of the whole substation. 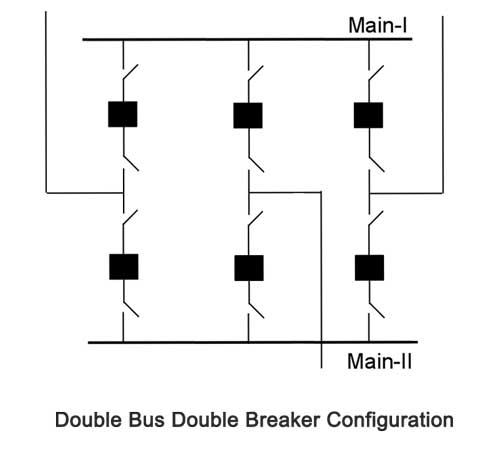 This configuration utilizes two buses and two breakers per circuit, both buses are normally energized and any circuit can be removed for maintenance without an outage on the corresponding circuit. Failure of one of the two buses will not interrupt a circuit because all of the circuits can be fed from the remaining bus and isolating the failed bus.

Substations with the double bus double breaker arrangement require twice the equipment as the single bus scheme but are highly reliable. Load balancing between buses can be achieved by shifting circuits from one bus to the other.

This scheme is typically found in EHV transmission substations or generating stations. 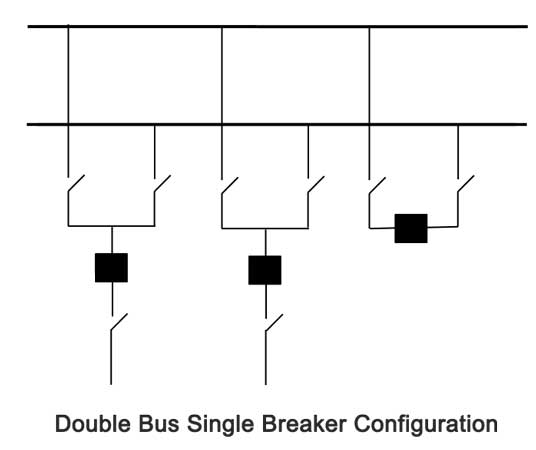 Substations utilizing this configuration are supplied with two busses. Each circuit is equipped with a single breaker and is connected to both buses using isolators.

A tie breaker connects both main buses and is normally closed, allowing for more flexibility in operation. A fault on one bus requires isolation of the bus while the circuits are fed from the opposite bus.

The double bus single breaker scheme is more expensive and requires more installation space than the single bus configuration. It is common to find this scheme with an additional transfer bus in EHV transmission substations. 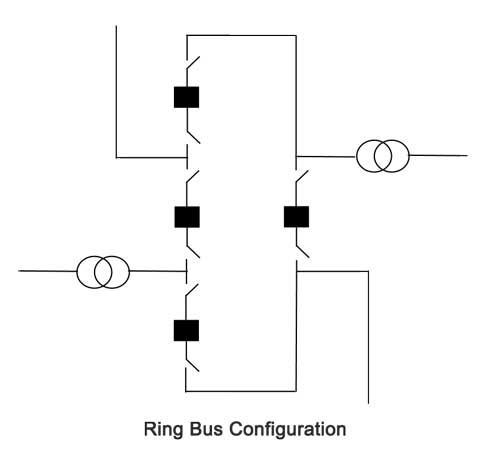 In the ring bus configuration, as the name implies, the circuit breakers are connected to form a ring, with isolators on both sides of each breaker. Circuits terminate between the breakers and each circuit is fed from both sides.

This scheme has good operational flexibility and high reliability, any of the circuit breakers can be opened and isolated for maintenance without interruption of service.

If a fault occurs in this configuration, it is isolated by tripping a breaker on both sides of the circuit. By tripping two breakers, only the faulted circuit is isolated while all the other circuits remain in service.

Ring bus schemes can be expanded to accommodate additional circuits, but its generally not suited for more than six. Careful planning should be used with this scheme to avoid difficulties with future expansion. 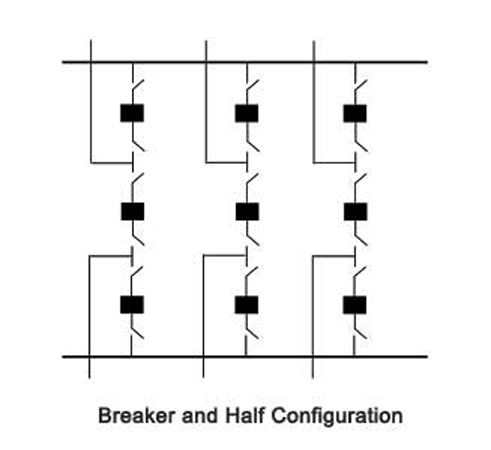 Breaker and Half Substation Configuration.

When expansion of the substation is required to accommodate more circuits, the ring bus scheme can easily be expanded to the One and Half breaker configuration. This configuration uses two main buses, both of which are normally energized with three breakers connected between the buses.

In this bus configuration, three breakers are required for every two circuits - hence the "one and half" name. Think of it as, to control one circuit requires one full and a half breaker. The middle breaker is shared by both circuits, similar to a ring bus scheme where each circuit is fed from both sides.

If a middle circuit breaker fails, the adjacent breakers are also tripped to interrupt both circuits. If a breaker adjacent to the bus fails, tripping of the middle breaker will not interrupt service to the circuit associated with the remaining breaker in the chain.

Only the circuit associated with the failed breaker is removed from service. The breaker and half configuration is very flexible, highly reliable, and more economical in comparison to the Double Bus Double Breaker scheme.

Protective relay schemes in this configuration are highly complicated as the middle breaker is associated with two circuits. It also requires more space in comparison to other schemes in order to accommodate the large number of components.