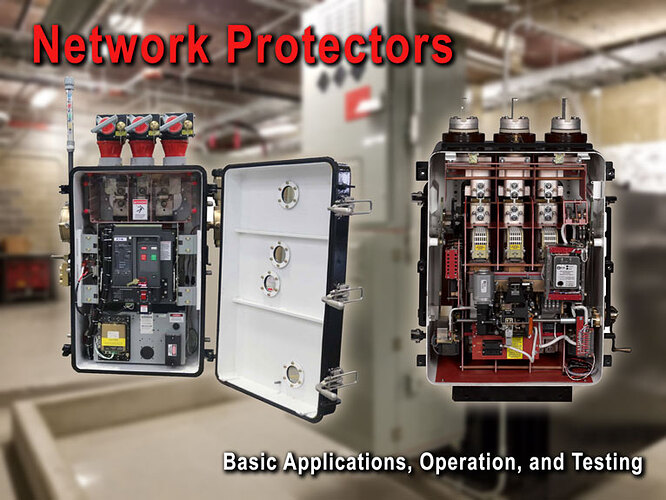 Network systems are commonly used in hospitals, high rise office buildings, and institutional facilities where a high degree of service reliability is required. In the network system arrangement, several utility services are paralleled at the transformer secondaries, creating a system that is dependable and versatile.

Distribution networks often utilize two or more transformers supplied from different high voltage feeders. The transformers are connected through network protectors to a common collector bar and the load served by cables or busses off the collector bus.

The most important elements of an a-c network power system are the network transformer and the network protector. These devices provide for automatic operation to reliably serve loads, isolate faults, and distribute power uniformly across the multiple primary circuits.

Secondary networks serve high-density loads (such as downtown districts), have multiple primary feeders, have secondaries tied in a grid pattern for reliability and most commonly have a grid voltage of 216/125 volts. 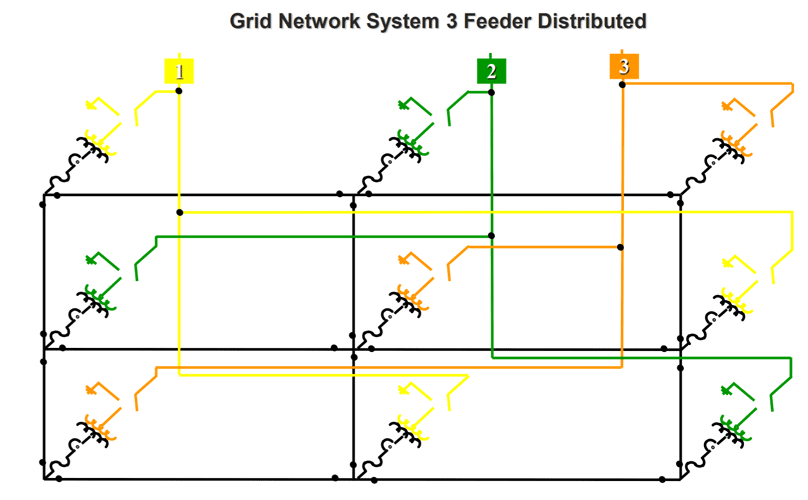 Spot networks refer to a single location (such as a large institutional building) with a transformer and network protector adjacent to a particular load. Spot networks have a voltage of 480/277 volts. 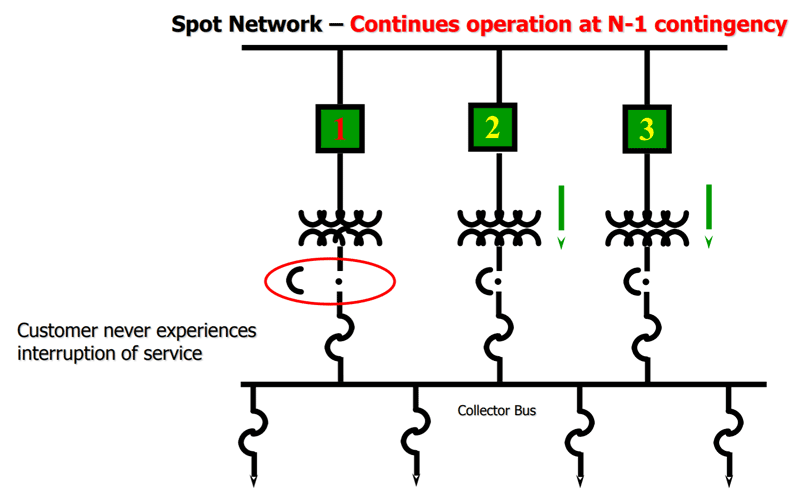 Special distribution transformers are used in network systems that are built with unique requirements for the application, such as ventilation, physical size, submersibility, and short-circuit ratings. Network transformers are typically available in sizes up to 2500 kVA, with the most common size being 500 kVA. 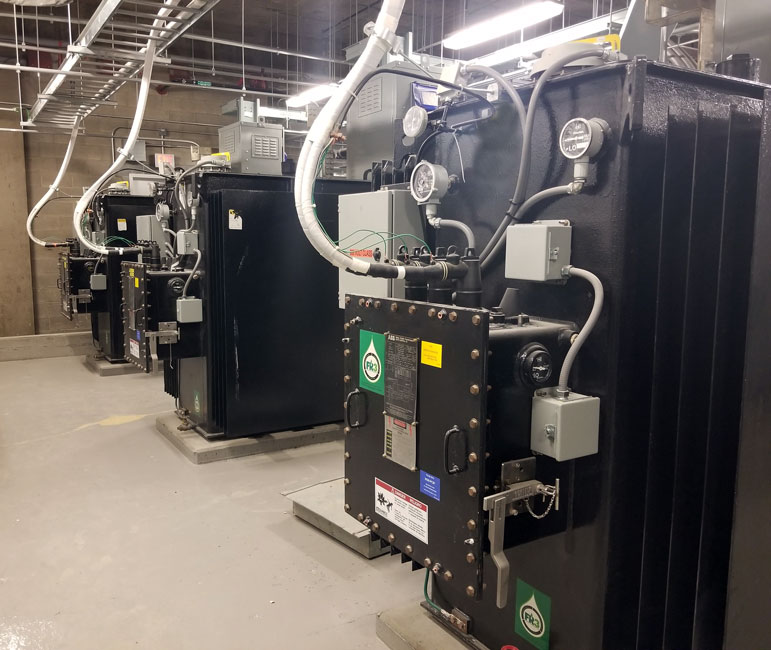 Network transformers are manufactured in several designs for installation in underground vaults, pad mounted or inside buildings. They are usually oil-filled or may use a biodegradable or synthetic non-flammable liquid for the insulating and cooling medium.

An internal disconnect switch is provided to isolate the transformer for maintenance or inspection and may also be used to ground the primary cable when work is being performed on the unit. Network transformer disconnect switches are manually operated and typically include an interlock to prevent improper operation with the circuit energized. 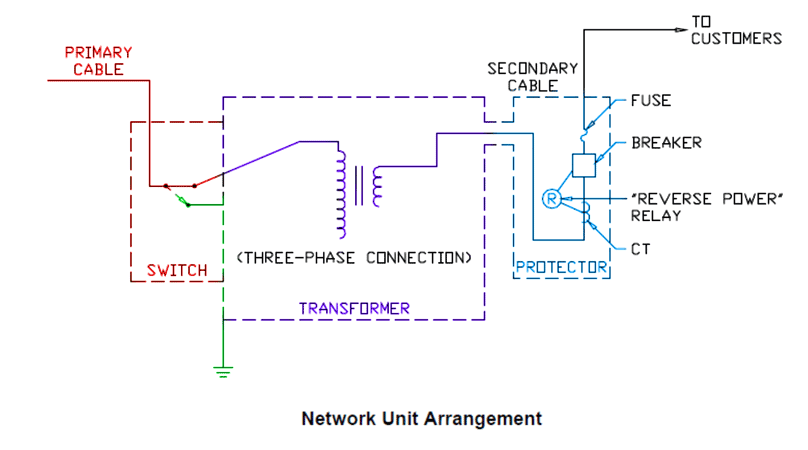 Network transformers are manufactured in several designs for installation in underground vaults, pad mounted or inside buildings. Photo: Richards Mfg.

Network systems may serve an area with a kVA demand as high as 40,000 kVA. In New York City individual networks may supply even larger loads, in some cases as great as 250,000 kVA.

Most faults can be cleared without interrupting service to any load on the collector bus. Think of network protectors as specially designed circuit breakers, used to isolate transformer faults which are back-fed through the low voltage system. 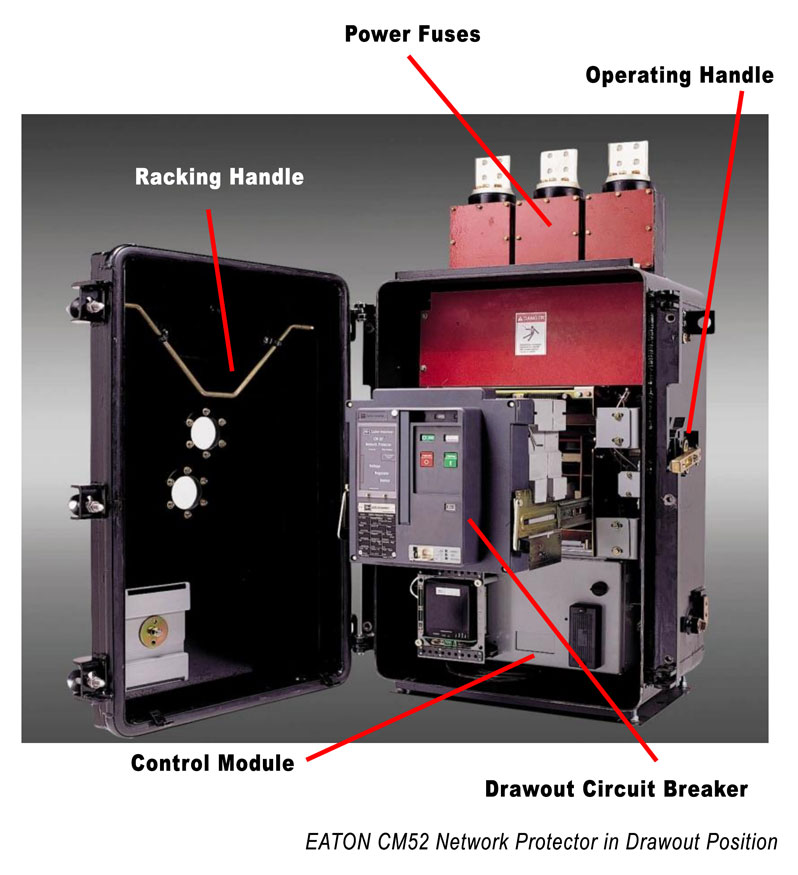 A network protector (NWP) is connected between the secondary terminals of the network transformer and the secondary network system. Photo: EATON

The network protector consists of a low voltage air circuit breaker and associated protective relaying as an integrated unit. Power fuses may be included for additional protection and sized for primary faults, which are not isolated by the network protector breaker.

The purpose of the network protector is to automatically isolate the network when a fault occurs on the primary system. For example, during a primary feeder fault, the circuit breaker located upstream will operate to open the primary feeder and both transformers connected to the faulted feeder will then be back fed by the secondary network.

The NWP relay will sense this as a reverse power condition and automatically trip open the network protector to isolate the fault. Service to all loads will continue uninterrupted, being supplied by the remaining four transformers and the grid system. 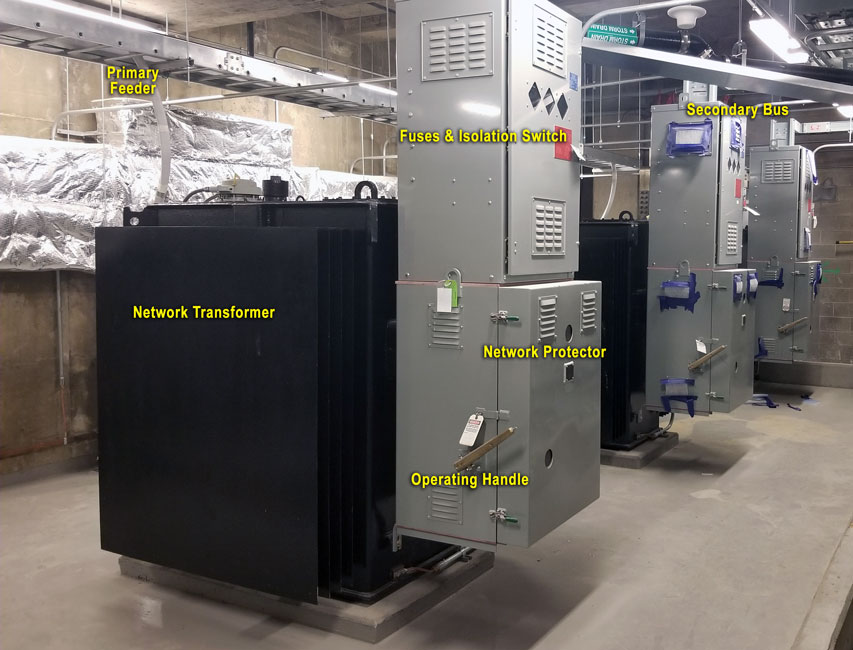 A secondary system fault will be cleared by secondary fuses, secondary cable limiters, or by the cable itself. Primary feeder breakers will not trip nor will network protectors trip when a secondary fault occurs.

Network protectors are available in submersible or non-submersible (ventilated) enclosures. The submersible enclosure provides protection against flooding and water damage to its enclosed mechanism.

The non-submersible enclosure is a dust-proof steel casing that provides the enclosed mechanism protection from dust and dirt. Both styles of protector are bolted directly to the network transformer tank. In some situations, a network protector may be mounted on a wall in the vault or located on a separate frame in the vault.

The network protector has an operating handle with three operating positions: "automatic," "open," and "closed". The automatic position can be considered as the normal handle position for it allows the relays to control the protector operation.

It is not recommended that a Network Protector be placed into service by utilizing the external handle CLOSE mode. The protector should be placed in the AUTO position to permit the protective relay to control the breaker actions. 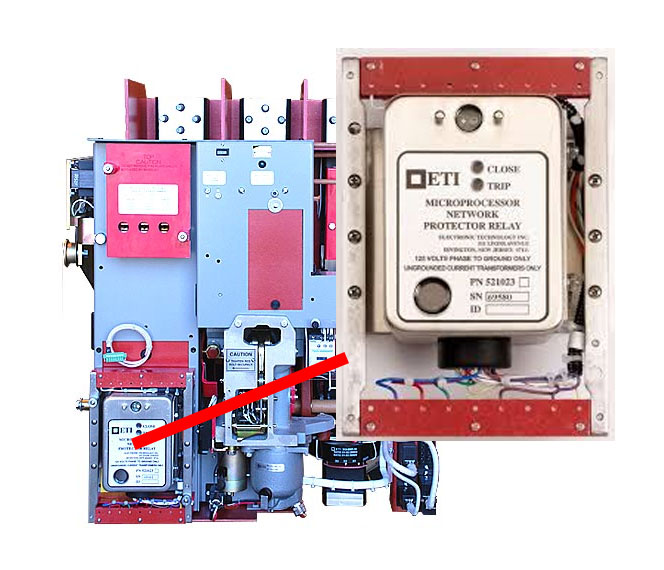 The NWP relay will sense a reverse power condition and automatically trip open the network protector to isolate the fault. Photo: Richards/ETI

The re-closing circuit (or master relay) monitors the transformer output voltage and compares that to the network system voltage.

In some particular relay schemes, the voltage and current must also be in phase for this operation to take place. The phasing relay looks at when the network's transformer voltage leads the network voltage by a specified amount. Its purpose is to get a re-close operation only when both the voltage comparison and phase comparison are within their specified ranges.

In order to provide secondary protection on higher voltage network systems, the utility company will typically install devices known as cable limiters. These devices consist of a copper tube with an element of reduced cross section, designed to operates similar to a fuse.

The limiter element is enclosed in a special housing and inserted into each end of the secondary main cables. The cable limiter is sized to blow for cable faults within the particular section of the secondary network it protects. 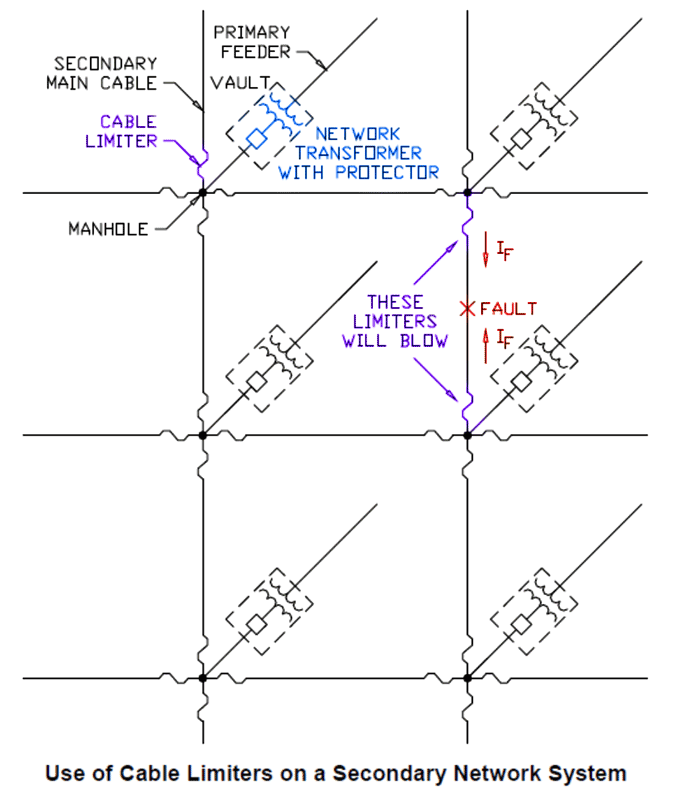 It’s important to note that a cable limiter is not the same thing as a current limiting fuse. Photo: Richards Mfg.

The use of cable limiters on secondary network are shown in the figure above. The two limiters protecting the faulted section will blow to isolate the fault. Note that all the adjacent cable limiters will “see” a much smaller level of current and will not operate.

The term “limiters” comes from their ability to limit damage due to a fault. A limiter can be thought of as a sacrificial element to prevent widespread damage to other equipment.

Power fuses may also be installed alongside network protectors. In this type of application, the current limiting fuse would be sized to blow for high magnitude secondary bus faults.

For the bus fault example shown in the figure above, all three limiting fuses would blow, protecting the system from damage.

Before placing a network protector into service, it should be tested. Maintenance inspections and routine tests are conducted throughout the year depending on the operating environment and service reliability requirements.

Network transformers deserve the same treatment when it comes to testing and maintenance, however for the purposes of this article, the testing section will focus only on the network protector unit itself.

WARNING: Testing network protectors involves working with live high voltage systems which can cause serious injury or death. Only trained and qualified testing personnel should conduct field maintenance, the information presented in this guide is for reference only.

General inspection procedures for network protectors include an evaluation of the overall physical and mechanical condition of the unit. Nameplate data should be compared to project drawings and specifications when acceptance testing.

Inspect the network protector installation including anchorage, alignment, and grounding. Verify that the unit is clean and that the arc chutes are intact.

Moving and stationary contacts should be inspected for condition and alignment. Primary and secondary contact wipe and other dimensions vital to satisfactory operation of the network protector should be verified as correct.

Mechanical operator and contact alignment tests should be performed on both the network protector and its operating mechanism. Bolted electrical connections should be inspected for high resistance using a low-resistance ohmmetter (DLRO), IR camera, or calibrated torque-wrench.

Inspect the network protector cell fit and alignment. The racking mechanism operation should be smooth and easy to engage, verify appropriate lubrication on moving current-carrying parts and on moving and sliding surfaces.

Submersible enclosures should be tested for leaks using techniques recommended by the unit manufacturer. Operations counter should advance one digit per close-open cycle and readings should be recorded as found and as left after testing.

Perform a contact/pole-resistance test and inspect other bolted electrical connections using a DLRO where applicable. In most cases a 10A test current is sufficient. Measure the resistance of each power fuse.

Investigate values which deviate from those of similar bolted connections by more than 50 percent of the lowest value. Investigate fuse resistance that deviate by more than 15 percent.

Insulation-resistance tests are performed for one minute on each pole, phase-to-phase and phase-to ground with network protector closed, and across each open pole. Voltage should be applied using values found in manufacturer’s literature or use NETA Table 100.1 as a substitute.

For units with solid-state components, follow manufacturer’s recommendation as test voltage can damage these components.

As a prerequisite to protective relay tests, any associated voltage and/or current transformer ratios and polarities should be verified as correct.

The minimum pickup voltage of the motor control relay should be within the unit manufacturer’s specifications, but not more than 75 percent of rated control circuit voltage per NETA standards.