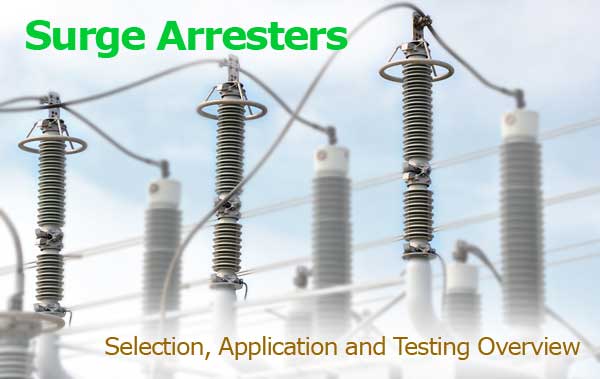 In the past surge arresters were called lightning arresters, this name was based on their primary objective of protecting electrical insulation from lightning strikes on the system. The more generic term "surge arrester" is now used to encompass overvoltage conditions which can occur from numerous other sources, such as switching operations and ground faults.

Everything from personal computers to HV transmission and distribution systems are susceptible to electrical surges and their destructive effects.

What is an electrical surge?

A "surge" on an electrical system results from energy being impressed on the system at some point, which can result from lightning strikes or system operations. The impressed energy travels throughout the system in the form of waves, with speed and magnitude that vary along with the parameters of the system. 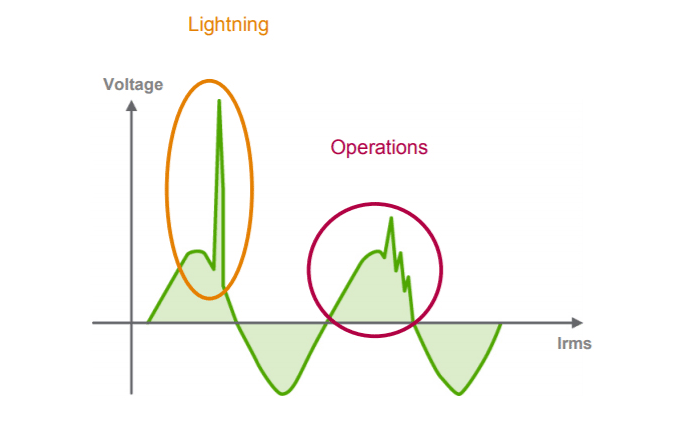 A “surge” on an electrical system results from energy being impressed on the system at some point, which can result from lightning strikes or system operations. Photo: Schnider Electric.

Along with surge phenomena, a system can also experience a longer term overvoltage from electrical faults. Depending on the configuration and grounding of the system, a single line-to-ground fault will cause system voltage on the unaffected phases to escalate.

Per the National Electrical Code (NEC), a surge arrester is defined as: "A protective device for limiting surge voltages by discharging or bypassing surge current, and it also prevents the flow of follow current while remaining capable of repeating these functions."

Older surge arresters generally consist of silicon carbide resistor blocks in series with air gaps, these arresters normally carry no current and have a single voltage rating. Aside from a few exceptions, selection of these arresters is fairly simple:

Metal oxide surge arresters contain blocks of a variable resistance material, usually zinc oxide, with no air gaps. Line-to-ground voltage is applied continuously between the line and ground terminals of the arrester, these arresters do carry a minimal leakage current which can be withstood on a continuing basis. 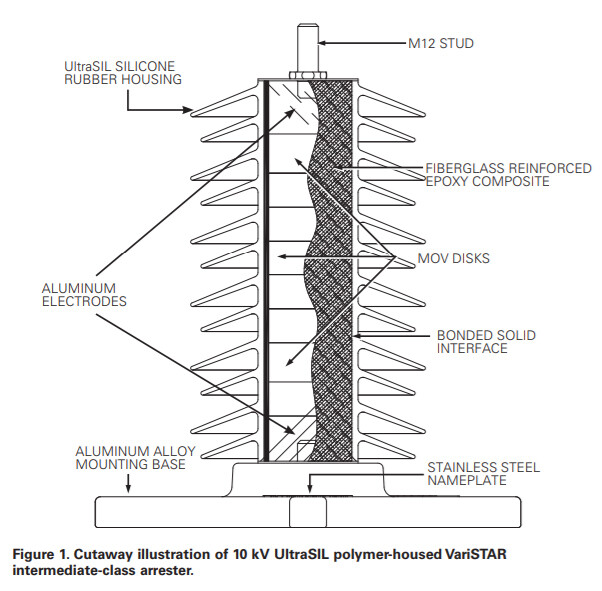 When surges occur, the arrester immediately limits, or clamps, the overvoltage condition by conducting the surge current to ground. After passage of the surge, the arrester returns to its initial state.

Metal oxide has many advantages as a surge protector, but it is somewhat more complicated than older surge arresters to apply correctly. Instead of a single voltage rating, metal oxide surge arresters have three ratings:

The class of surge arrester to be applied on a system depends upon the importance and value of the protected equipment, the impulse insulation level, and the expected discharge currents the arrester must withstand. 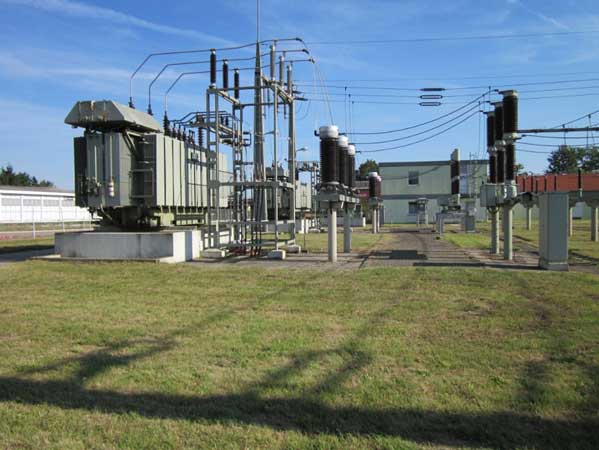 It is important that surge arresters of the correct voltage rating be used. Photo: pxhere.

The primary objective in arrester application is to select the lowest rated surge arrester that will provide adequate protection of the equipment insulation and be rated such that it will have a satisfactory service life when connected to the power system. 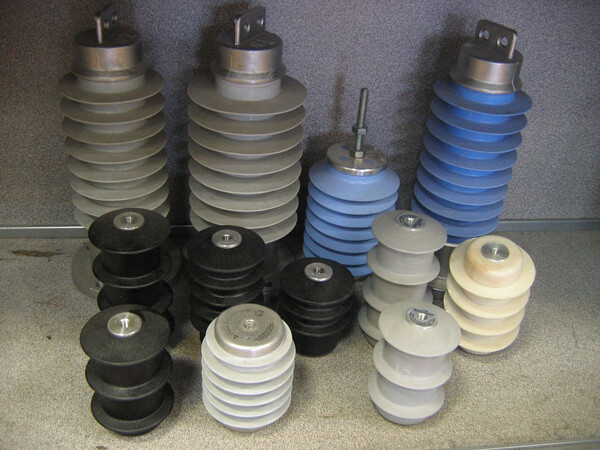 The proper voltage rating of surge arresters depends on:

There is a delicate balance between equipment protection and service life of a surge arrester:

A comprehensive surge arrester selection and application process should include a review of:

Knowing the system configuration (wye/delta, grounded or ungrounded) is a key factor in selecting an arrester rating. Arrester nominal ratings for various utilization system voltages (line-to-line) are based on the system's grounding configuration.

Choosing the correct arrester rating is critical to prevent an application where the arrester can potentially have a violent failure. Any system other than a solidly grounded configuration is considered to be effectively ungrounded and a higher arrester rating should be chosen.

Arresters are continually exposed to the power system operating voltage during normal operation. For each arrester rating, there is a recommended limit to the magnitude of voltage that may be applied continuously. This is called the Maximum Continuous Operating Voltage (MCOV).

The arrester rating is selected so that the maximum continuous power system voltage applied to the arrester is less than, or equal to, the arrester's MCOV rating. Both the circuit configuration (wye or delta) and arrester connection (Line-to-Ground or Line-to-Line) are taken into consideration.

Special attention should be given to the grounding configuration of the system, either solidly grounded or effectively ungrounded (impedance/resistance grounded, ungrounded, or temporarily ungrounded). This is a key factor in the selection and application of an arrester.

If the system grounding configuration is unknown, assume the system is ungrounded. This will result in choosing an arrester with a higher continuous system voltage and/or MCOV rating. 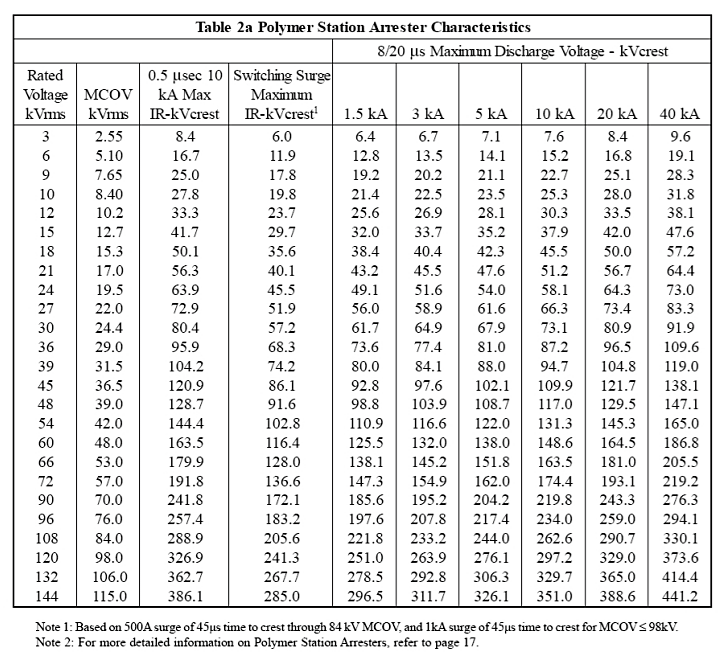 The arrester rating is selected so that the maximum continuous power system voltage applied to the arrester is less than, or equal to, the arrester’s MCOV rating. Photo: General Electric.

Depending on the time needed for protective relays to clear ground faults off the system, the choice will be between arresters rated 12 kV, 15 kV and 18 kV.

Temporary overvoltages can be caused by numerous system events, such as switching surges, line-to-ground faults, load rejection and ferroresonance. The system configuration and operating practices are evaluated to identify the forms and causes of TOV.

The primary effect of temporary overvoltages on metal-oxide arresters is the increased current, power dissipation, and increased arrester temperature. These conditions affect the protection and survivability characteristics of the arrester. 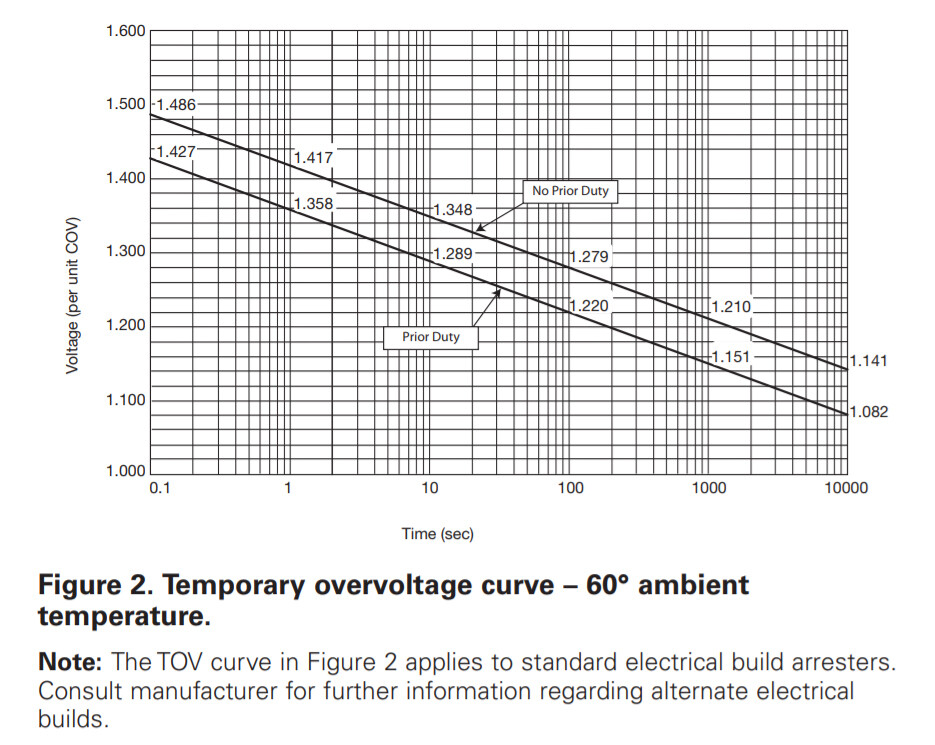 The surge arrester's TOV capability must meet or exceed the expected temporary overvoltages of the system.

Surge arresters are selected in coordination with standard electrical equipment insulation levels so that they will protect the insulation against over voltages. This coordination is based on selecing an arrester that will discharge at a lower voltage level than the impulse voltage required to break down the insulation.

Most electrical equipment is rated for impulse levels as defined by industry standards. The Basic Impulse Insulation Level (BIL) of equipment is determined by applying a full-wave voltage surge of a specified crest value to the equipment insulation, this is known as the Impulse Test.

If the service capability of a surge arrester is exceeded, the metal-oxide disk(s) may crack or puncture, reducing the arrester's internal electrical resistance. This reduction of resistance will limit the arrester's ability to withstand future overvoltages but it will not jeopardize the insulation properties of the arrester. 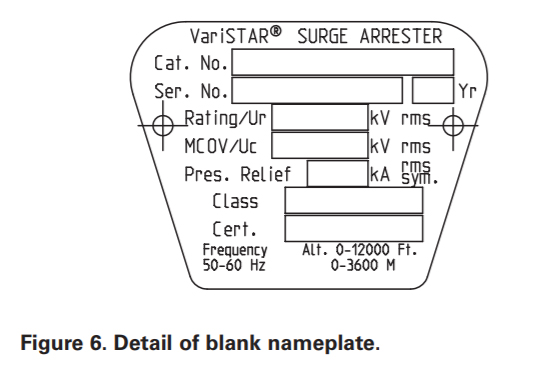 In the event that an arrester fails, a line-ground arc will develop and pressure will build up inside the arrester housing. The pressure is safely vented to the outside and an external arc will be established, maintaining equipment protection.

Once an arrester has safely vented, it's no longer capable of pressure relief and should be replaced immediately. Arresters should have a pressure/fault current capability greater than the maximum short-circuit current available at the intended arrester location.

To help ensure maximum service life and reduce the chances of sudden failure, surge arresters should be maintained and electrically tested at regular intervals. Inspection and testing should also be performed as part of new installations prior to commissioning. 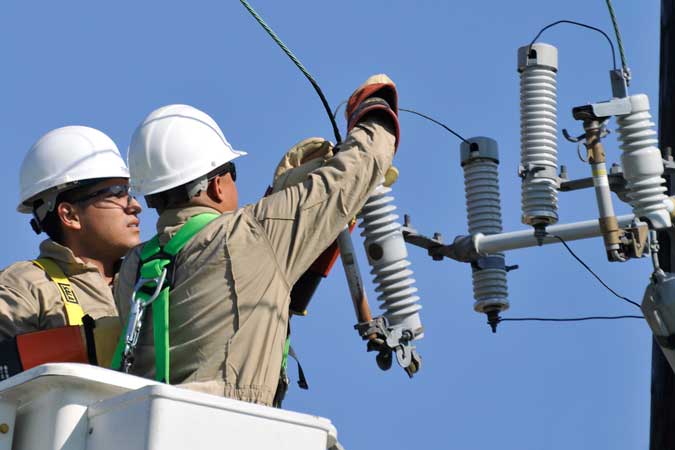 A comprehensive outline for testing surge arresters is described below. Only qualified workers with the proper safety training and calibrated testing equipment should perform these tasks.

The physical and mechanical condition of the surge arrester should be evaluated before any testing is performed. For new installations, compare the arrester nameplate data with project drawings and specifications.

Inspect the arrester housing, mounting, alignment, grounding, and required clearances. Surge arresters should be clean and free of obstructions to minimize contaminates that may lead to tracking or be harmful to the arresters insulating properties. Prior to cleaning the unit, perform as-found tests to compare results. 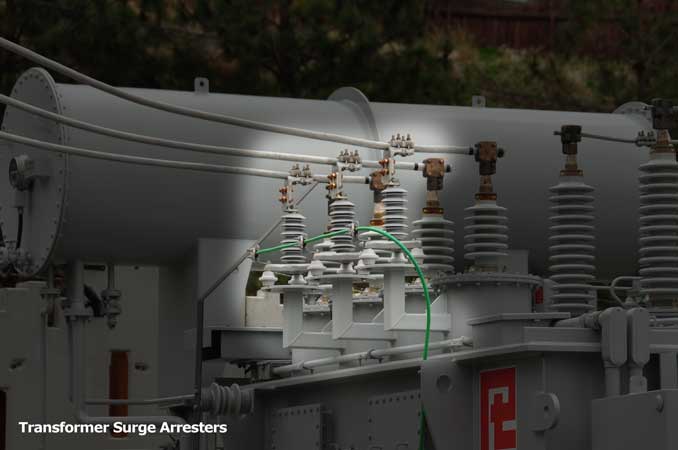 The physical and mechanical condition of the surge arrester should be evaluated before any testing is performed. Photo: Paul Chernikhowsky via Flickr.

Bolted electrical connections should be inspected for high resistance by using a low-resistance ohmmeter. Compare the measured resistance values to the values of similar connections.

Values which deviate from those of similar bolted connections by more than 50 percent of the lowest value should be investigated.

Tightness of accessible bolted electrical connections may also be verified by using a calibrated torque wrench in accordance with manufacturer's published data or NETA Table 100.12. 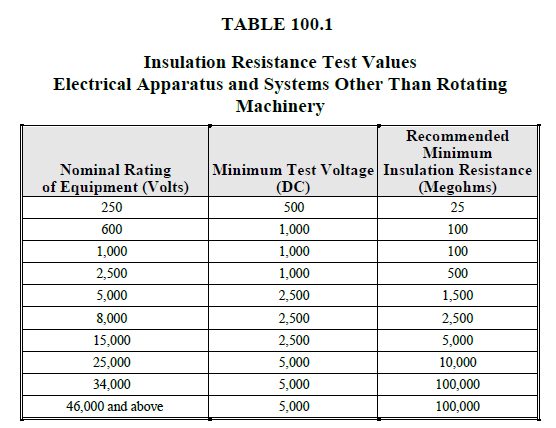 The measurement of dielectric loss is effective in detecting defective, contaminated, and deteriorated arresters. Watts loss values are evaluated on a comparison basis with similar units and test equipment manufacturer's published data.

Arrester assemblies consisting of single units per phase are generally tested by the grounded-specimen test method (GST). All arresters should be tested individually and not in parallel. The watt-loss test is an optional test per NETA 2017 acceptance and maintenance 2015 testing standards. 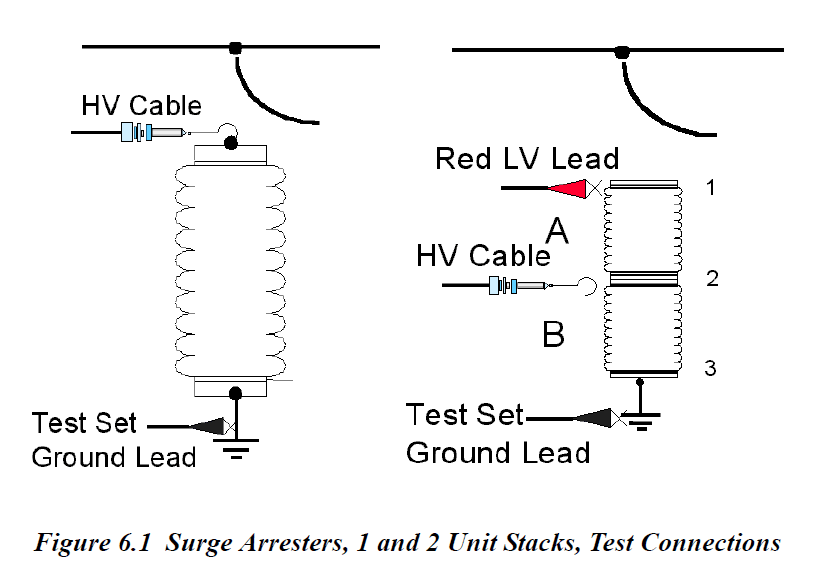 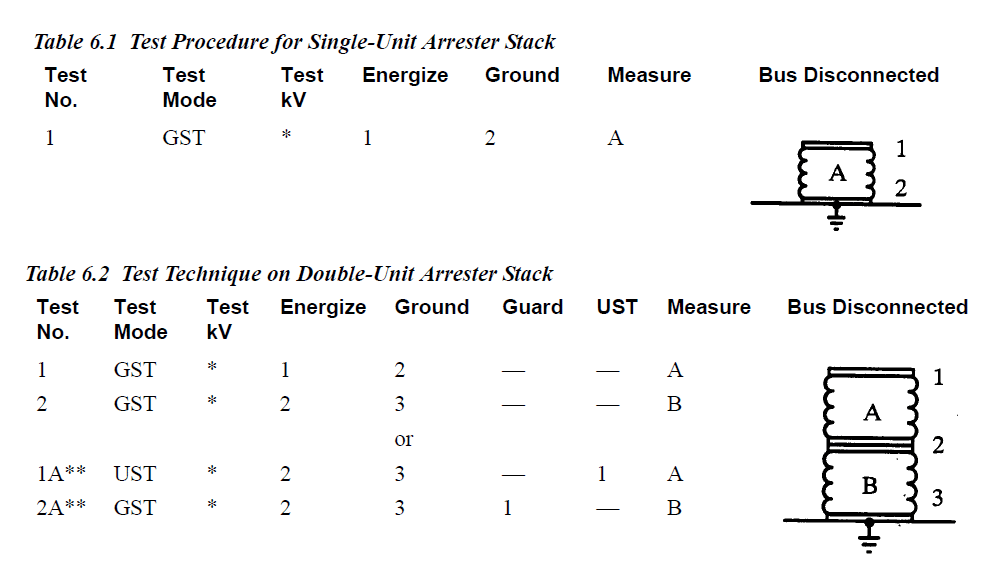 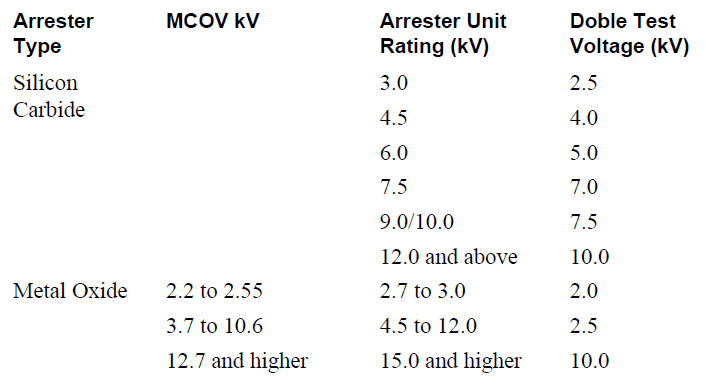 Stroke counters measure lightning strikes by the induction of current and do not require the use of any external power source. Verify that stroke counter, if present, is correctly mounted and electrically connected. Record the stroke counter reading to compare with previous records.