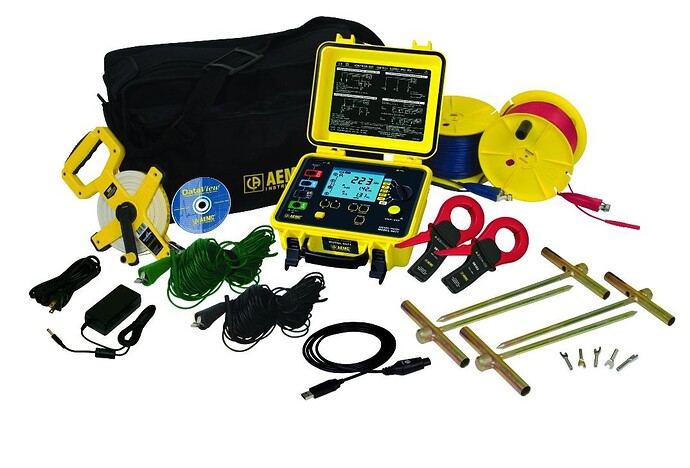 In electrical power distribution systems, a protective ground conductor is an essential part of the safety earthing system. For measurement purposes, the Earth serves as a somewhat constant potential reference against which other potentials can be measured.

Knowing how to properly test an electrical ground system is essential to ensure that it has an appropriate current-carrying capability to serve as an adequate zero-voltage reference level.

In this article, we take a look at frequently asked questions by test technicians and trainees related to ground-resistance test methods.

1. What is the difference between a two-point, three-point, and four-point ground resistance test?

Ground tests are named after the number of points that come in contact with the soil. Commonly used terms refer to dead earth, fall of potential, and Wenner method tests.

2. How often should ground systems be tested?

Weather conditions and seasons have the biggest effect on ground systems. Most standards recommend testing in odd intervals of 5, 7, or 9 months. Using odd intervals ensures the worst case seasons will be revealed.

3. What is considered to be an acceptable ground resistance reading?

The goal in ground resistance testing is to achieve the lowest ground resistance value possible. The most widely used specification for grounding is found in the National Electric Code, which specifies residential grounds have a resistance of 25 ohms or less.

Some specifications may demand a lower resistance, such as one specified by an engineer, client or equipment manufacturer. The NFPA and IEEE recommend a ground resistance value of 5 ohms or less. Computers, generating stations, and process control equipment may require as little as 1 or 2 ohms.

4. What affect does rain have on a ground resistance test?

Increased moisture from rainfall dissolves salts in the soil and promotes added conductivity – resulting in a lower resistance. If it has rained heavily prior to your test and the electrode barely meets specifications, odds are that it won't pass when the soil is dry.

5. How deep should I drive my test probes?

It is a common misconception that driving test probes deeper will improve ground-resistance readings. Test probes need to only make a minimum amount of contact with the soil, which can be obtained by observing the test set display.

When using Ground-resistance sets with high resistance tolerance, it may not even be necessary to penetrate the surface in order to meet the threshold tolerance. Simply laying the probes flat and watering down the area will often be sufficient.

6. Does watering down a ground test probe to improve contact influence my test result?

Watering a ground-resistance test probe is a specialized means of improving contact, similar to sanding an electrode before connecting it to a circuit. This method should have no influence on your final reading as long as the electrodes have enough spacing when watering.

7. Is it possible to perform ground resistance test on concrete or macadam?

Since concrete conducts current fairly well, chances are you only need to lay your probes flat on the surface and wet the area to establish contact. Macadam on the other hand does not conduct as well as concrete because of the tar content, but it may be possible to achieve enough contact.

If you are having problems obtaining ground resistance readings with the probes provided with your test set, try using a ground contact mat made of a flexible metallized conductive pad, such as a piece of sheet metal.

8. What can I do if there isn't enough room to run out my test leads?

If there is not enough room to stretch out your leads for fall of potential testing you will have to try another method, reference the test procedures described in IEEE Standard No. 81. The most-used procedure used in this situation would be the Star-Delta method.

The Star-Delta method is an adaptation of the two-point method. Test probes are arranged in a fairly close triangle around the ground under test and a series of measurements are made between the various two points (probe to ground and probe to probe, for example). Values are then run through a series of specially designed equations in order to obtain a ground-resistance reading.

9. Can I test ground rods in sandy or rocky soil?

It is possible to test ground rods driven in sandy or rocky soil, although its more difficult to test because the moisture that promotes electrical conductivity quickly drains away. Rocky soils especially have poor overall consistency and reduced surface contact electrodes due to the large spaces between each element. In many cases longer and stronger probes may be required to make good contact with the soil.

10. Can an insulation tester (Megger) or multimeter be used to perform ground resistance tests?

With a multimeter, it is possible to measure the resistance of the soil between a ground electrode and an arbitrary reference point (ex. water pipe system), but in a real world situation, ground fault currents may encounter a higher resistance.

Measurements made with a DC multimeter or insulation tester are subject to distortion by electrical noise in the soil. Ground resistance test sets are specifically designed to expose insufficient test conditions.