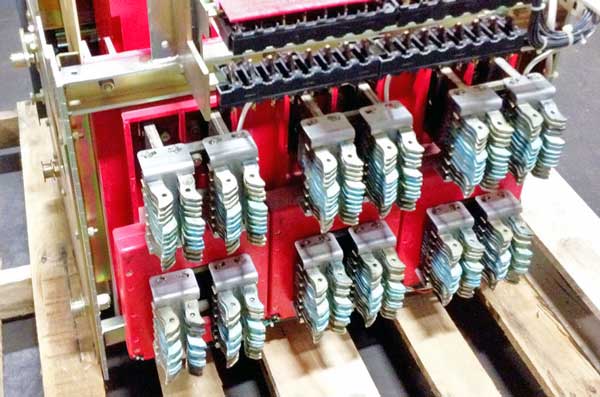 If the primary stabs of a circuit breaker haven’t been lubricated, it increases the force required to connect them to a power source.

Lack of lubrication is the number one problem test technicians run into when servicing circuit breakers in the field. All circuit breakers have lubricant applied to them at the factory, but over the course of time this lubricant dries out, leaving metal-to-metal wear in its place.

The result is a circuit breaker that won’t open, won’t close, or operates slower than usual. To keep circuit breakers operating at their best, the following areas should be checked for proper lubrication as part of your electrical preventive maintenance plan:

Racking a circuit breaker, whether in or out, presents the greatest risk to personnel. If the primary stabs (shown above) haven’t been lubricated, it increases the force required to connect them to a power source. As the lubricant gets gummy it will take more effort to rack in the breaker, increasing the potential of an arc flash incident.

Whenever a bus connection is made or broken without arc chutes or extinguishers there is an increased hazard from arc flash. Unqualified operators are notorious for using excessive force when encountering interlocks or other resistance when racking circuit breakers in or out. The resulting damage can be dangerous to the power system and to themselves.

Important: Always review manufacturers literature and familiarize yourself with the specific procedures required before attempting to operate any circuit breaker.

When lubricating circuit breakers, remember the phrase “a little goes a long way.” Apply a thin layer of lubricant to the primary and secondary connection points, just enough to reduce the resistance of the mechanical connection. Avoid excessive lubrication build up that will eventually attract dirt and other deposits.

As a circuit breaker carries load, heat is produced by the I2R current losses across the current path. The higher the load current, the greater the losses will be and the more heat will be produced. Heat increases the rate at which the lubricants dry out, even if the breakers are exercised regularly. 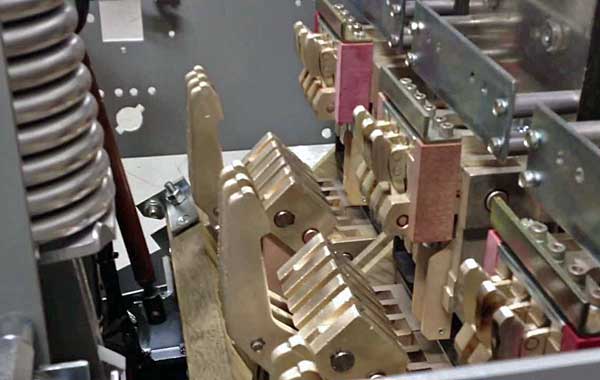 Unlike bolted pressure switches, circuit breaker contacts usually should not be lubricated.

Grease is forced out of pressure points over time, the exact points that need lubrication the most. Exercising the circuit breaker will move lubricants back into the pressure points. However, all lubricants will eventually dry out over time and need to be replaced.

Unlike bolted pressure switches, circuit breaker contacts usually should not be lubricated. The heat from the current flow through the contacts breaks the lubricant down and causes contact resistance to increase. It may be acceptable to apply an extremely thin layer of lubricant to protect from corrosion in certain atmospheres.

Each time the contacts are opened or closed, arcing takes place on the contact surfaces, breaking the lubricant down even more quickly. Contact-resistance tests are used to help detect abnormally high resistance across these surfaces, which could indicate deteriorated lubrication or pitting in the main contacts.

Be sure to inspect the lubrication state of latch faces and rollers. If lubrication is dirty, dusty, or thick, it needs to be replaced. In general, you can expect the mechanism to need cleaning at about the same time as the current path.

Clean any accessible latch and roller surface you can reach and re-lubricate it. If a roller is sticky or hard to spin, it may need to be removed and lubricated. This can be more than a ten-minute job, especially if it is hard to get to.