A typical wiring diagram with DC control for a Westinghouse DHP is shown in the figure below. We will be using this simple diagram to discuss the components involved with the electrical operating sequence of a circuit breaker. 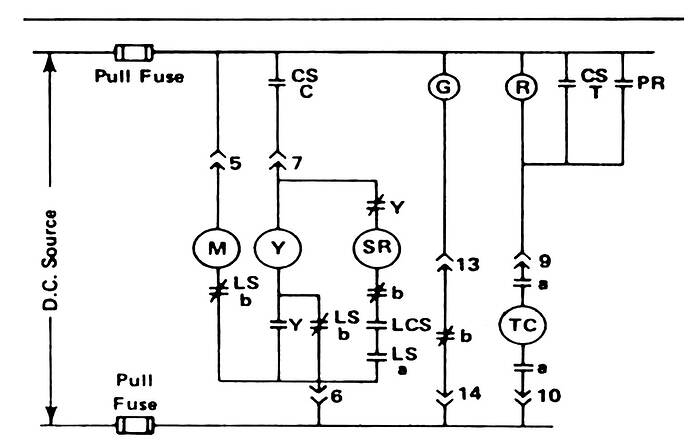 Typically located on the cubicle door or at a remote control panel. Used to manually operate a circuit breaker by means of electrical control. CSC = Close contact. CST = Trip contact.

The primary purpose of the protective relay is minimizing damage to equipment and interruptions to power systems when electrical failures occur. The relaying equipment is aided in this task by instrument transformers that sense abnormal power conditions.

The trip coil is a simple solenoid that operates the circuit breaker trip latch.

Locks out the control circuit if the close operation is not completed. If the breaker does not close on the first attempt, and the close coil remains energized, the “Y Relay” provides a lock out to prevent the breaker from attempting another close.

If the close signal is initiated but not removed the breaker has the potential to cycle through an endless close, trip, charge, close and trip cycle (Pumping). The Y coil opens the Y contact in the close circuit and as long as the close signal is present the circuit breaker can’t re-close.

The close coil is a solenoid that operates the circuit breaker close latch, allowing for remote closing operations.

Normally operated from a timing cam, which operates the switch to open the normally closed contacts and de-energizing the motor when the breaker is charged. It can also have a set of normally open contacts, which close and complete the circuit to the close coil.

A mechanically-operated switch which senses if the trip latch is reset. Indicates when the breaker is “ready to close.”

When the breaker opens the green lamp illuminates – the circuit is complete with 52b contact switching from open to close.

With the breaker closed and energized, the red lamp illuminates to indicate a live breaker. The trip circuit is “armed,” and once a control switch or protective relay contact is operated, the breaker will open.

The contacts of the auxiliary switch are designed to open or close external control circuits as the breaker operates. The circuit breaker operating mechanism controls opening or closing of the switches.

The aux switch contacts, which are open when the breaker is open, are called “a contacts”. These contacts are in the same position as the breaker main contacts.

The aux switch contacts that are closed when the breaker is open are called “b contacts”. These contacts are in the opposite position as the breaker main contacts.