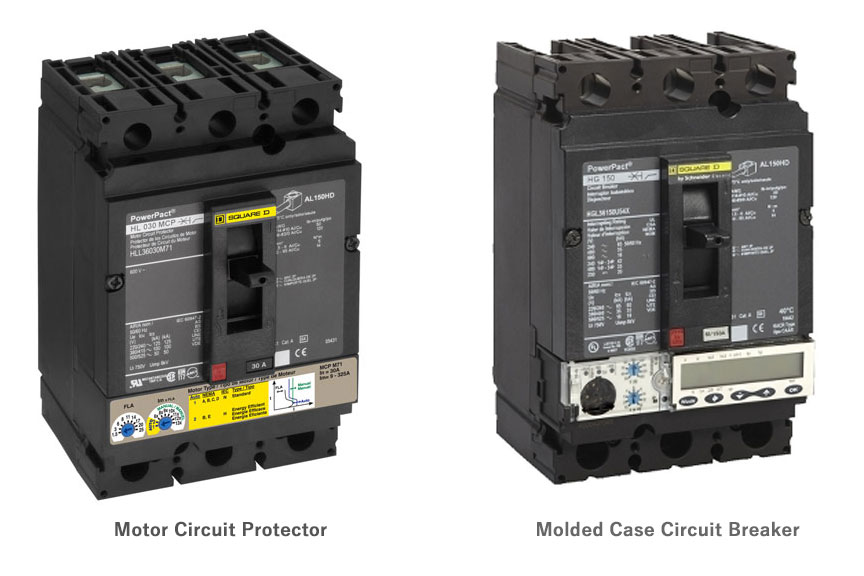 An overload occurs when electrical power exceeds more than rated current, a condition which can increase over time. Small rises of current are generally not of concern, but if not corrected, excessive overloads can lead to equipment damage.

Short-circuits, on the other hand, happen very quickly and produce currents that are several magnitudes higher than rated full load. Short-circuits must be eliminated very quickly to prevent equipment failure and subsequent damage.

IT Circuit Breakers are often referred to in the field as “Motor Circuit Protectors” (MCP), which is an old Westinghouse (now EATON) trade name. Most other manufacturers will rarely use that term to officially describe them in specifications.

Another common term for IT breakers is "Magnetic Only" or "Mag-Only" circuit breaker. These breakers can look nearly identical to Molded Case Circuit Breakers to the untrained eye, the major difference being MCP's do not come equipped with thermal trip functions and are specifically used in factory assembled, tested and listed combination motor starters where there is a separate thermal protective element, such as an overload relay.

The main takeaway is that the IT circuit breaker has no overload trip sensing elements. National Electrical Code requires that they can only be used as part of a factory assembled tested and listed assembly, specifically a "Combination Motor Starter".

MCP-style breakers are very common in Motor Control Center (MCC) buckets, a type of combination motor starter. The inside of an MCC bucket will contain the MCP with separate thermal overload protection (sometimes called "heaters") beneath the starter.

The MCP circuit breaker provides short-circuit protection to all components within the combination starter, while separate protection is used for the motor circuit. The IT breaker is not UL listed, it is only UL Recognized as a component, because it can only be used as part of a larger assembly and needs another device (the overloads) to make it function correctly in a circuit protection scheme.

Electrical engineers do not "decide" whether or not to use an MCP/IT CB, other than indirectly by incorporating a factory built, tested and listed combo starter that uses one into their design. The MCP is never used in a normal switchboard or panelboard application.