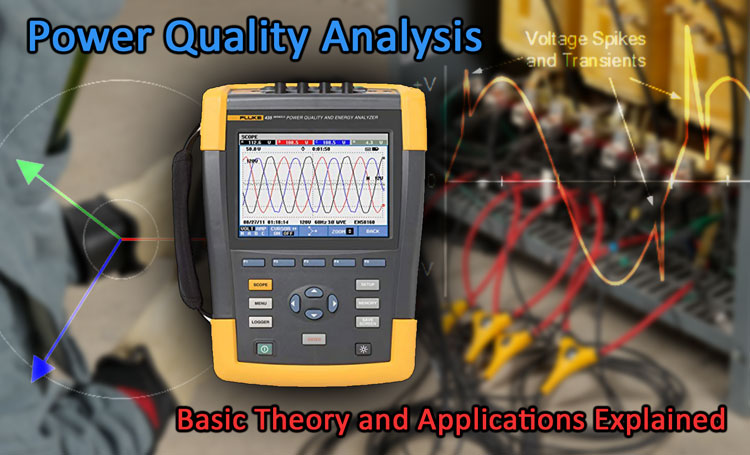 There are a number of ways in which electric power can be of poor quality. Improper wiring, incorrect grounding, and unbalanced loads are just a few examples of conditions that can produce electrical noise through an electrical system and compromise power quality.

There is no such thing as perfect power quality in the real world. Service interruptions, equipment malfunction, and excess power consumption are all common symptoms of poor power quality.

To minimize the risk of lost production and damage to electrical equipment, power quality analysis is used to monitor a system for problems, find the cause, and initiate corrective action. After system data is collected in the field, a power quality engineer will look for unusual events and determine the proper power conditioning equipment or other steps needed to resolve the issue.

It is important that power serving electrical loads is “clean,” meaning voltage and current waveforms are relatively in phase, free of distortion, and balanced between each other. Low quality power can increase utility bills and cause damage to critical power equipment, resulting in higher production costs and greater chance of downtime.

An “ideal” three-phase power system has the following characteristics: 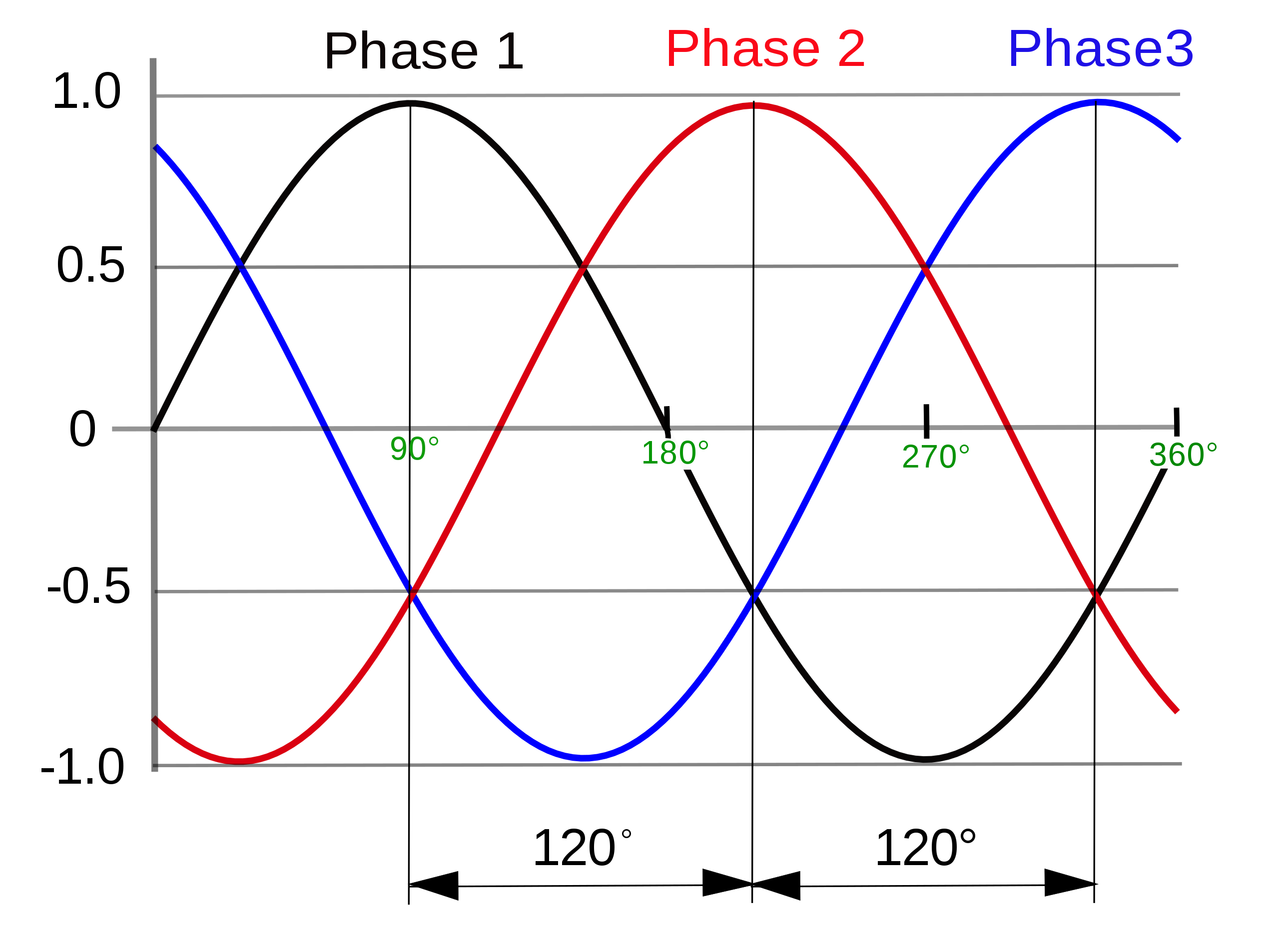 In an ideal 3-phase system, voltage and current waveforms are relatively in phase, free of distortion, and balanced between each other. Photo: Wikimedia.

No power system is “ideal” in the real world, but understanding these characteristics can help identify non-ideal power characteristics of real systems. There is some acceptable range of deviation from “ideal” for each application, which can be defined as “acceptable power.”

In the United States, acceptable limits for service voltage and utilization voltage are defined in ANSI C84.1. Power quality monitoring is used to ensure that an electrical power system is operating within acceptable limits, and to capture waveform distortion and other anomalies that may cause power interruptions or other system phenomena.

The most simple type of power quality problem occurs when power delivered to an electrical load goes away, this is called a “power interruption.” The different types of power interruptions are classified according to their duration. 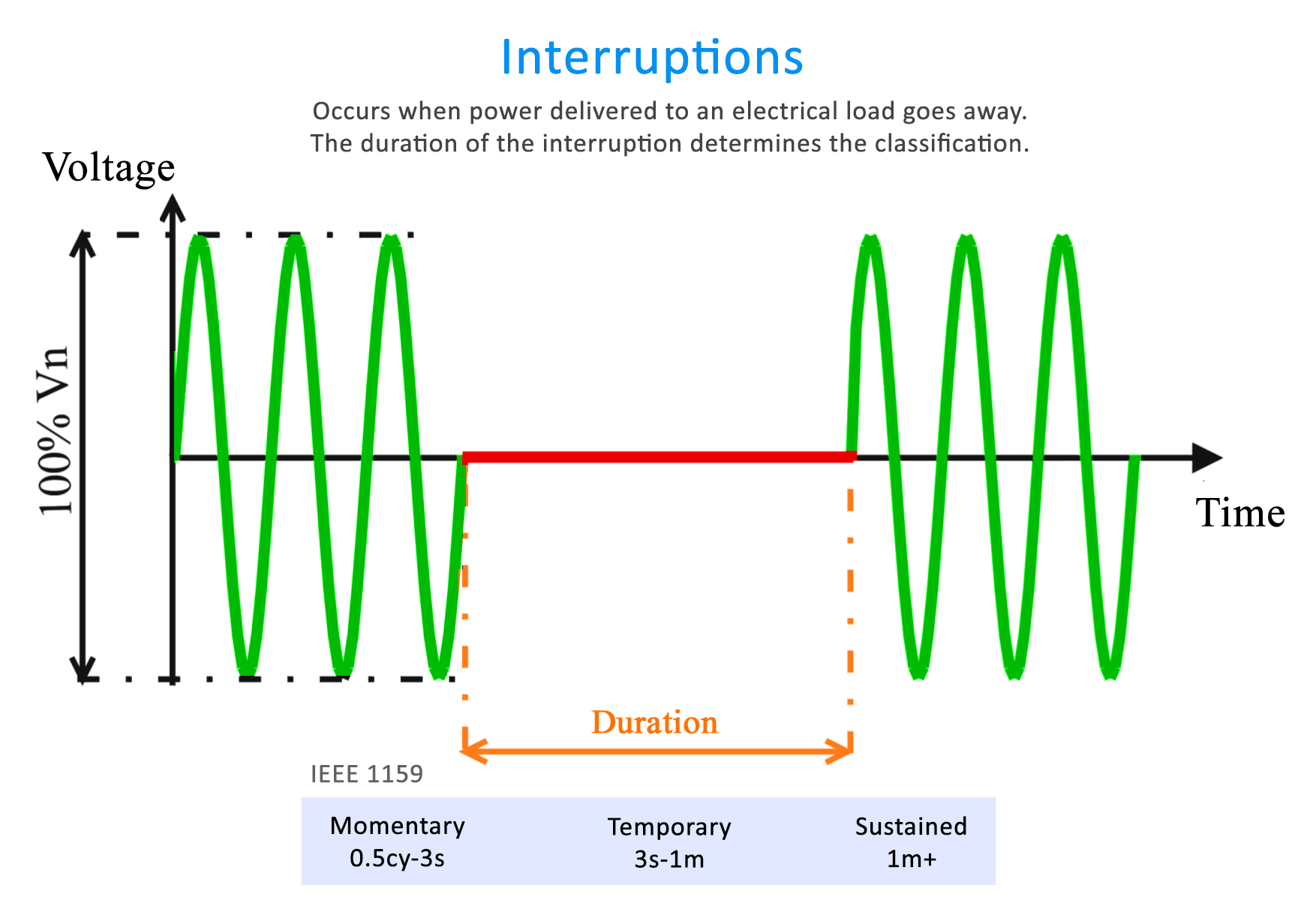 A power interruption occurs when power delivered to an electrical load goes away. Photo: TestGuy.

Power interruptions are caused by many different sources, such as lighting strikes utility switching operations, physical damage to power lines, and human error. A momentary power interruption could have serious or even dangerous results depending on the load connected, such as microprocessor-based or hospital equipment.

The second most simple type occurs when voltage at the load drops below a minimum rated voltage or climbs above a maximum rated voltage for some period of time. Depending on how long these conditions last, they may be referred to as undervoltage or overvoltage and sags or swells.

Sags and Swells occur on the power system when voltage drops below or exceeds nominal voltage for a short duration. Photo: TestGuy.

Reductions in voltage and sags usually occur when the rms current to the load increases significantly. There are 3 categories of sags and swells, depending on their duration:

Repetitive voltage reductions in lighting circuits can be detected by the human eye, a phenomena known as “flicker.” The term flicker refers to a very specific problem related to human perception of light produced by incandescent light bulbs, not necessarily general voltage fluctuations. 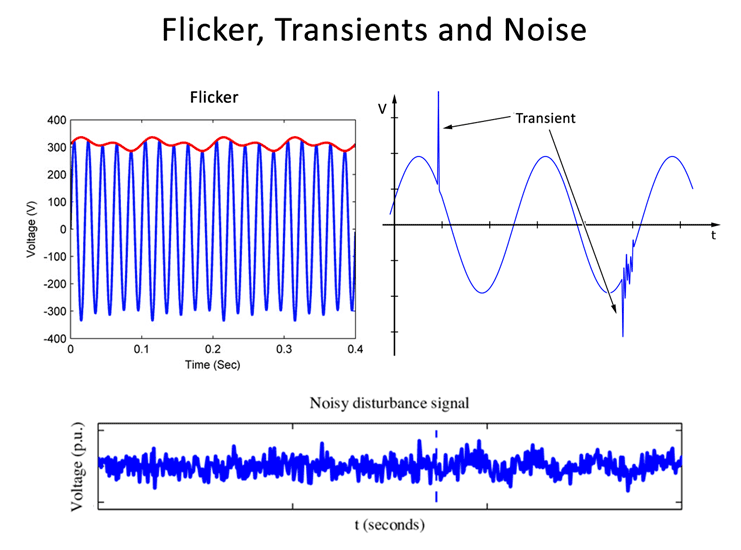 Noise refers to unwanted, high frequency oscillations that are superimposed on an alternating voltage or current sine wave. This phenomena is usually intensified by improper grounding and is capable of disrupting electronic devices such as computers and programmable controllers.

Electrical loads are often composed of more than just pure resistance, the combination of resistance and reactance in an AC system is called the impedance. Reactance comes in two forms: inductive and capacitive, both of which do not contribute to “useful” work on the power system.

Power Factor is a way to characterize how much electrical power goes toward producing useful work such as light, heating, or machinery. Low power factor means a large amount of energy is being lost in the system in the form of wasted heat, which generally equates to higher energy bills and equipment degradation. 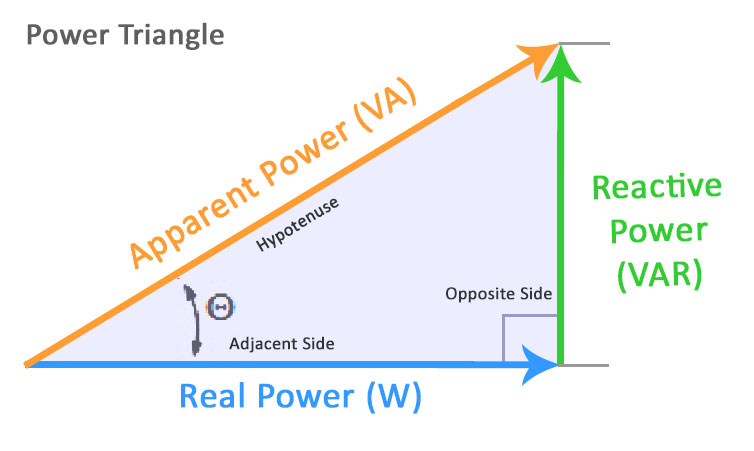 Three types of power - true, reactive, and apparent - relate to one another in trigonometric form. Photo: TestGuy.

When reactance is present in an AC system, the voltage and current sine waves will shift out of phase from each other. Voltage leads current with inductive reactance and Current leads voltage with capacitive reactance, the two cancel each other out. 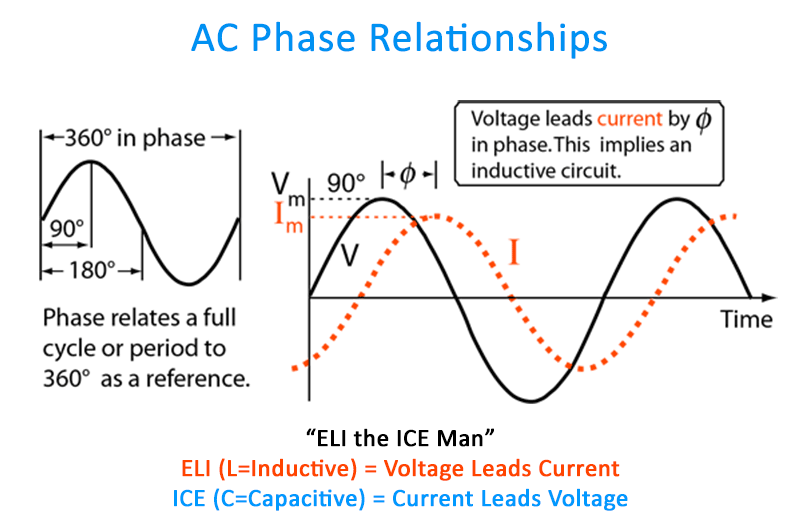 When reactance is present in an AC system, the voltage and current sine waves will shift out of phase from each other. Photo: Georgia State University.

Unbalance occurs in three-phase power systems when single phase loads (lighting, office equipment, etc.) do not draw the same amount of current on each phase, resulting in greater stress on the neutral conductor. An ideal condition occurs when the loads are balanced, meaning that the voltage and current phases are exactly 120 degrees apart from each other, although the currents might not be in-phase with the voltages. 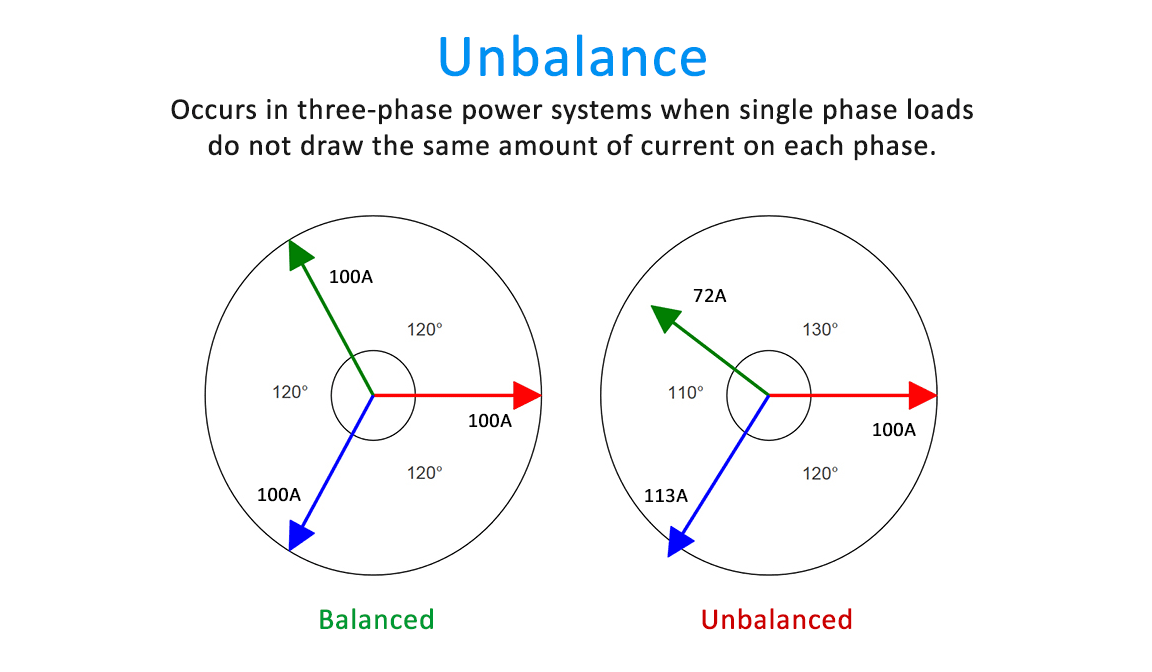 Unbalance occurs in three-phase power systems when single phase loads do not draw the same amount of current on each phase. Photo: Sonel.

Motors being driven by unbalanced voltages will result in a small motor torque working in the opposite direction from the motor rotation, a phenomena known as counter-torque. When this condition occurs, part of the energy delivered to the motor will work against itself.

Harmonics are a form of waveform distortion that occurs in circuits containing semiconductor based electronics such as LED lighting, switching power supplies, electronic ballasts, computers, robotics, test equipment, etc. These “non-linear” loads impose higher frequency sine waves on the system, which result in more power lost in the form of wasted heat.

The excess heat produced by harmonics can have detrimental effects on a power system. Transformers are especially susceptible to damage caused by harmonics due to stray “eddy currents” which circulate in the iron core and produce excess heat.

Harmonics are identified by their frequency in multiples of the “fundamental” or main frequency. Photo: Researchgate.

How Power Quality is Measured

Several types of instruments are available for power quality measurement, each serving their own unique purpose. Power quality analyzers are the most commonly used tools to observe real-time readings and also collect data at high speeds for downloading to computers for analysis, opposed to a power recorder or “data logger” which is mainly used for simple voltage and current measurements.

Often times power interruptions are unpredictable and of short duration, which can only be captured using a power quality meter (PQM) installed over a period of days, weeks or months. Each phase in the system has a voltage probe and current sensor applied to monitor the magnitude and polarity of each channel over the specified period. 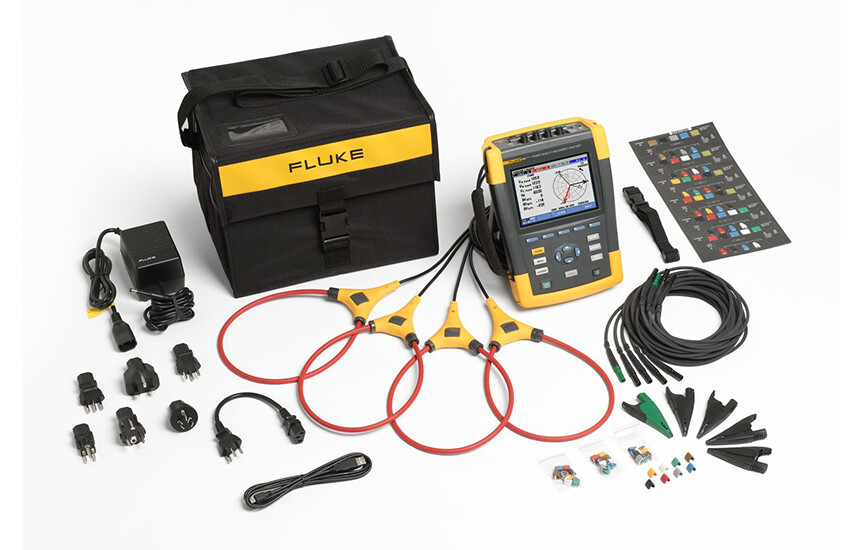 Several types of instruments are available for power quality measurement, each serving their own unique purpose. Photo: Fluke Corporation.

A cycle is the time that the waveform takes to travel from the zero line up to its positive peak, back down to its negative peak, and then back to zero. Power quality meters can be extremely high speed devices designed to capture events down to the sub-cycle level. 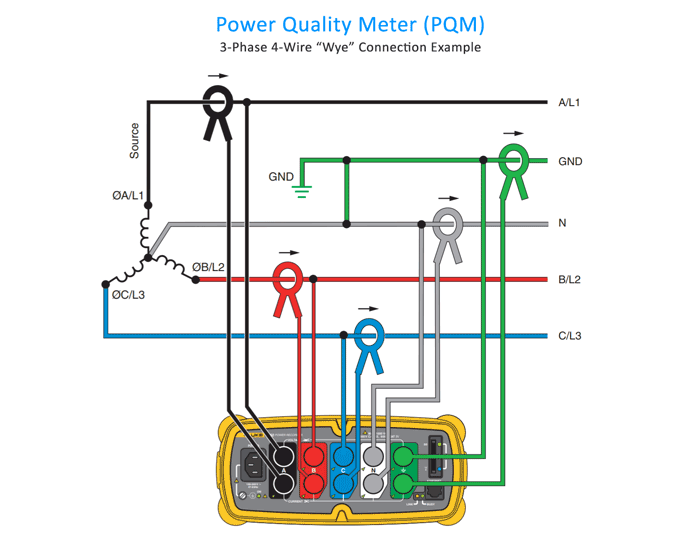 The type of meter to install will depend on the data to be captured. For example, a simple ampere load evaluation or utility bill audit would require a far less sophisticated meter than trying to pinpoint the cause of a nuisance trip or other power interruption.

The most important factor to consider when performing power quality analysis is safety. Often times meters are applied live with equipment in service which can be an extremely dangerous task.

This type of work should only be performed by qualified personnel while observing all appropriate safety precautions. A local power outage at the monitoring location is always the safest way to install and remove a power quality meter. 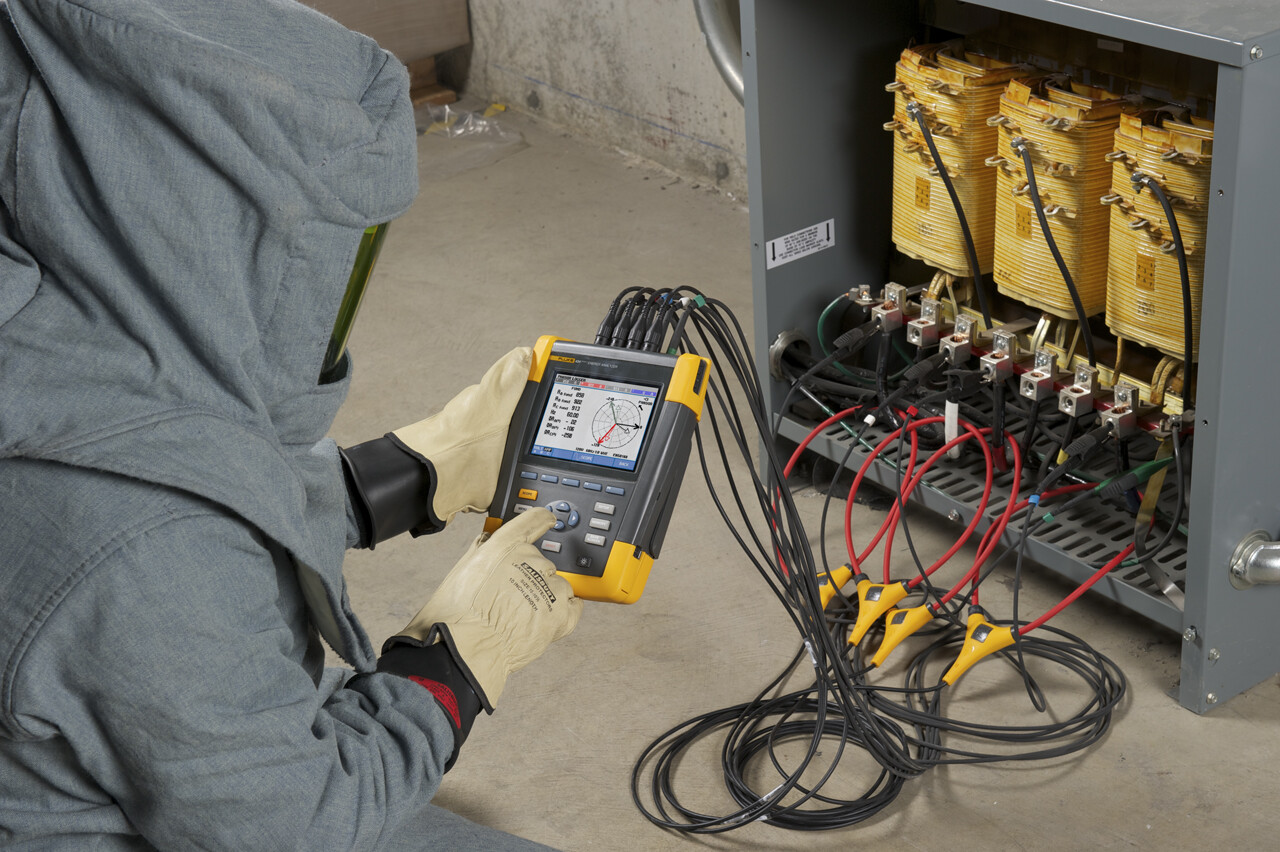 The most important factor to consider when performing power quality analysis is safety. Photo: Fluke Corporation.

A power quality meter can plot the voltage and current waveforms as functions of time, this is called an oscillogram. Data can be extracted from the power quality recorder and analyzed to determine the overall condition of the power system using various timeplots and tables.

The actual data analysis is usually performed by an electrical engineer, who will generate a report that provides a summary of the various power conditions, a list of events that occurred during the analysis, and any corrective action or recommendations that should be considered. 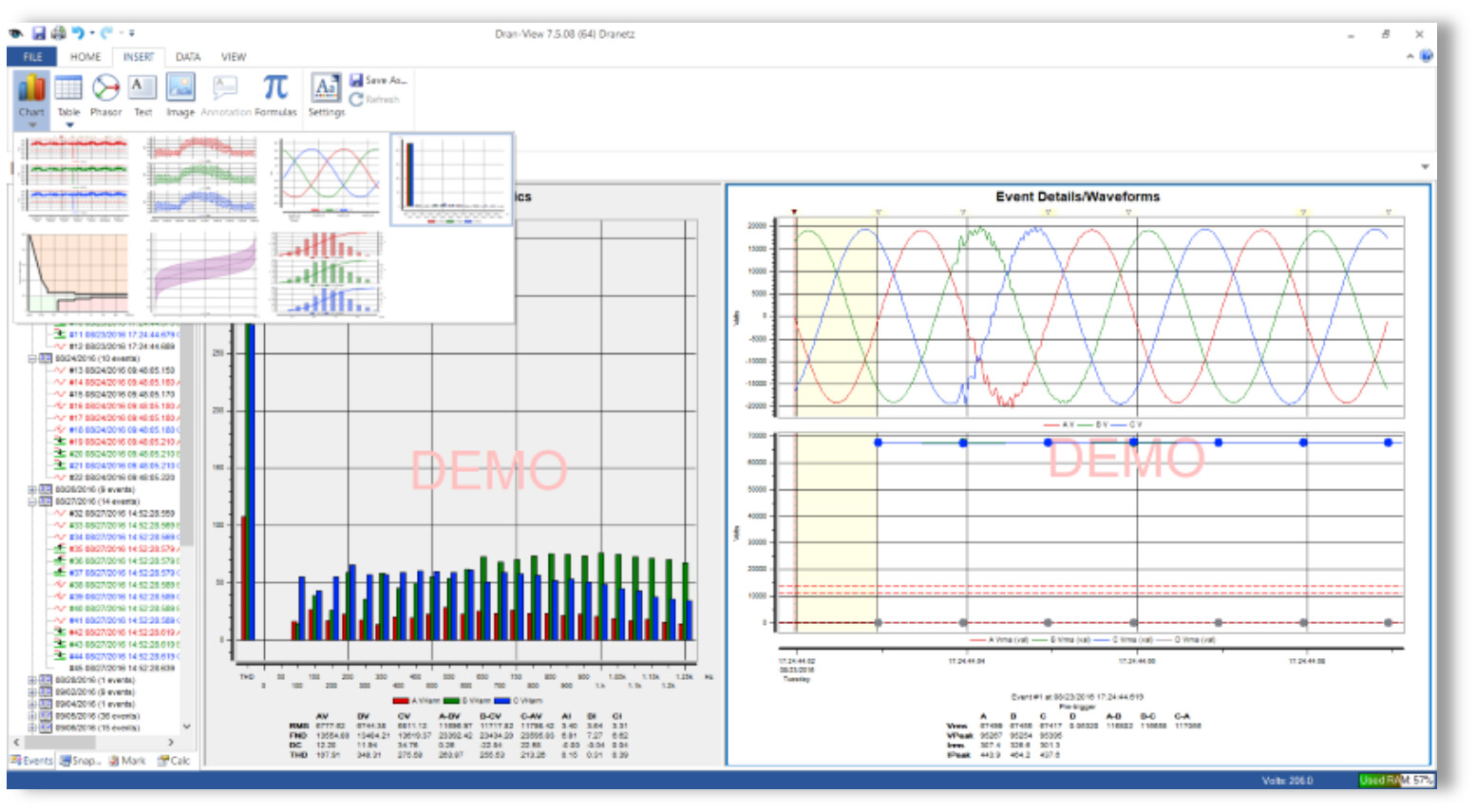 Data can be extracted from the power quality recorder and analyzed to determine the overall condition of the power system using specialized computer software. Photo: Dranetz BMI Dranview

Power Quality Meters are capable of calculating a large number of power measurements at extremely high speeds. These measurements may include minimum, average, and maximum values for parameters such as: 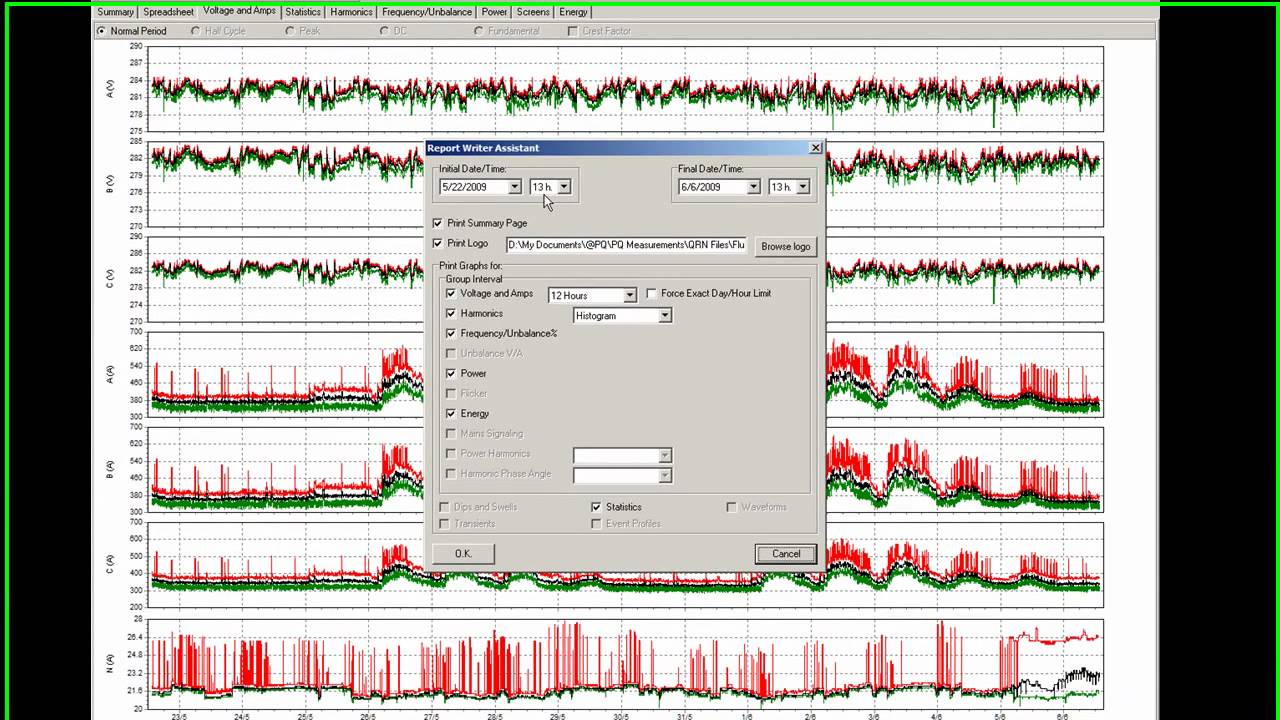 Depending on the results of the power quality analysis, a number of recommendations can be made to improve the quality of an electrical power system. Some of the common solutions found in power quality reports are briefly described below.

1. Voltage stabilizers (or regulators) may be used to provide precise voltage regulation to protect equipment from overvoltage, undervoltage, sags and swells. 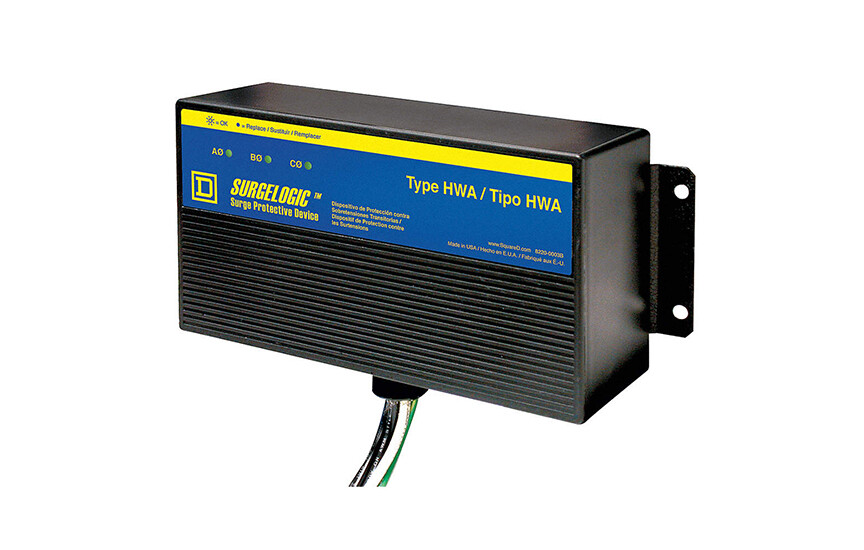 Electronic equipment should be protected from transients with surge suppressors. Photo: Square D.

3. Snubber circuits can be used on inductive loads to suppress the transient that naturally occurs when de-energizing the load. Typical snubber circuits use a resistor-capacitor (RC) circuit, a metal oxide varistor (MOV) or a diode.

4. Noise problems can be addressed by using line filters, isolation transformers, and line conditioners. Line filters are also called electromagnetic interference (EMI) filters or radio frequency interference (RFI) filters. They should be installed at branch panels or at any sensitive electronic load such as computers and medical equipment.

5. Low power factor can be corrected with the use of capacitor banks to cancel out inductive loads. The banks may be placed at each inductive load or they may be installed upstream to protect a group of motors, or a single compensation system may be installed at the origin of the installation. In every case, the capacitor banks correct the power factor upstream of the bank, but not downstream.

6. Unloaded synchronous motors can be used to continuously correct a system’s power factor by adjusting the excitation of the synchronous motor's field. The motor can be made to behave like a variable capacitor, a device referred to as a synchronous condenser. 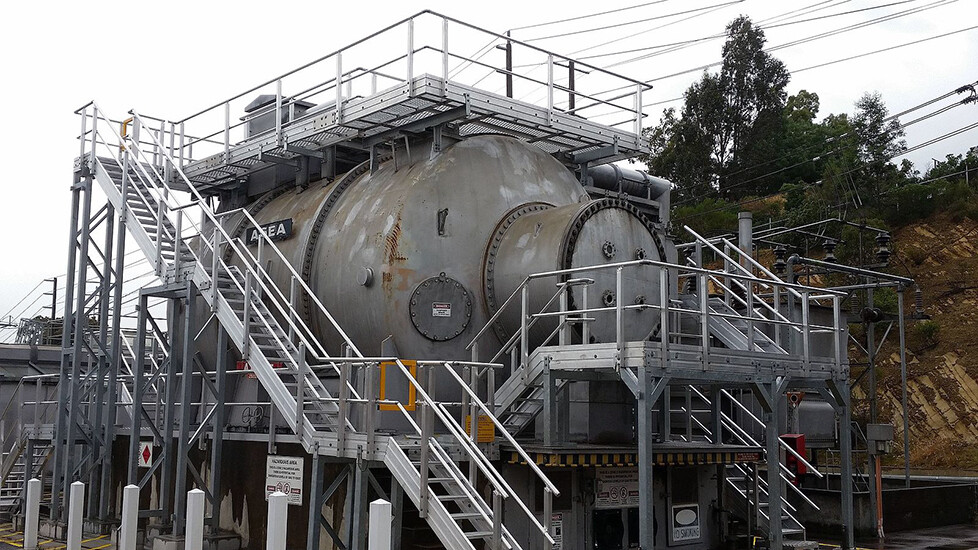 7. Unbalance can be corrected by redistributing single-phase loads onto different circuits in order to minimize the maximum unbalance over some period of time such as a full week. Power quality meters are used to monitor current draw on all three phases and the neutral wire for several days or weeks at a time.

There are a number of industry standards available that address the correct procedures and methods for performing a power quality analysis. These standards should be reviewed to help better understand the science behind monitoring and correcting power quality: