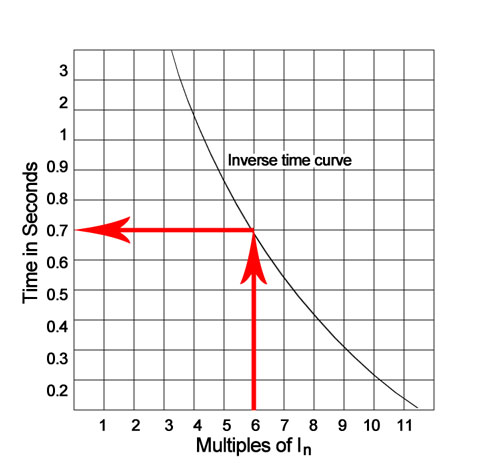 Time-current curves are used to show the amount of time required for a circuit breaker to trip at a given overcurrent level.

Time-current curves are typically shown on a log-log plot. Figures along the horizontal axis of the curve represent the continuous current rating (In) for the circuit breaker, figures along the vertical axis represent time in seconds.

To determine how long a breaker will take to trip: find the current multiple of (In) at the bottom of the graph. Next, draw a vertical line to the point where it intersects the curve and then draw a horizontal line to the left side of the graph to find the trip time.

The total clearing time of a circuit breaker is the sum of the breaker's sensing time, unlatching time, mechanical operating time and arcing time.

Curves are developed using predefined specifications such as operation at an ambient temperature of 40°C, so keep in mind that the actual operating conditions of the circuit breaker can cause variations in its performance.

Most curves have an information box that will define which circuit breaker the curve applies to. This information box may also contain important notes from the manufacturer such as the allowable deviation from trip times. 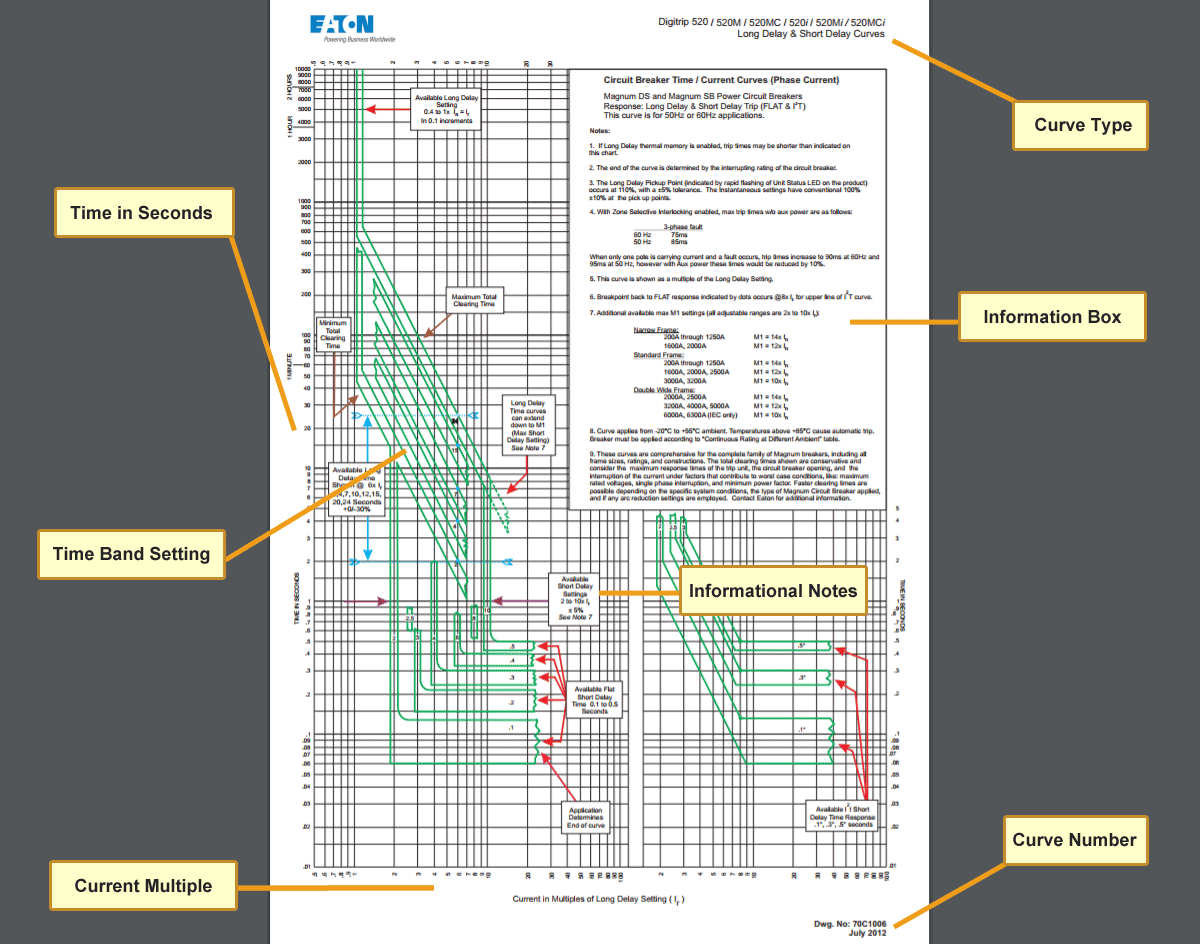 In thermal magnetic breakers, a thermal overload occurs when a bi-metal conductor inside the circuit breaker deflects after becoming heated by the load current, de-latching the operating mechanism and opening the contacts.

The larger the overload, the faster the bi-metallic strip will heat up and deflect to clear the overload. This is what is known as an “inverse time-curve.”

In electronic circuit breakers, the long-time function (L) simulates the effect of a thermal bi-metal element. The nominal pickup point where an electronic trip unit senses an overload is roughly around 10% of the selected ampere rating. Once picked up, the circuit breaker will trip after the time specified by the long-time delay adjustment has been achieved.

In electronic circuit breakers, the Instantaneous (I) function simulates the magnetic characteristic of a thermal-magnetic circuit breaker. This is achieved through the microprocessor which takes samples from the AC current waveform many times a second to calculate the true RMS value of the load current. Instantaneous tripping occurs with no intentional time delay. 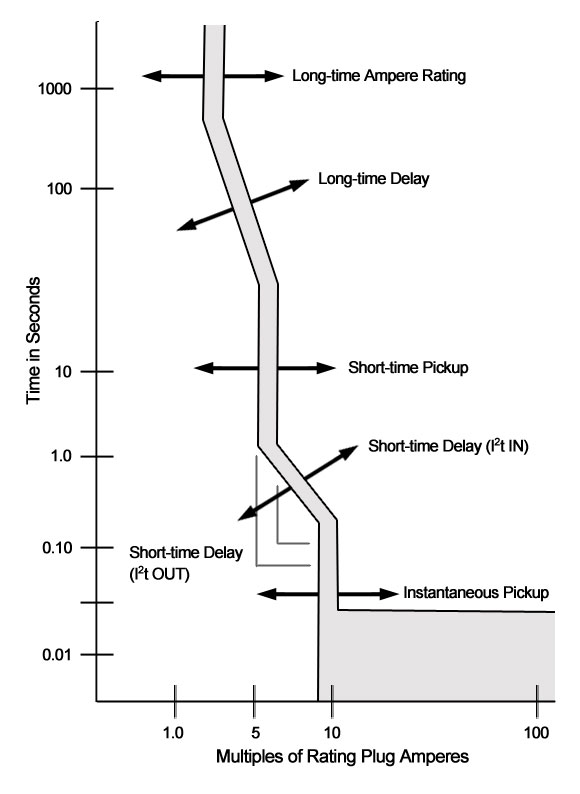 The I2t characteristic of the short time function determines the delay type. I2t IN will result in an inverse-time delay that resembles the time/current characteristics of fuses. This is similar to the long time function except with a much faster delay. I2t OUT provides a constant delay, usually 0.5 seconds or less as noted on the time-current curve.

Circuit breakers equipped with zone interlocking on short delay with no restraining signal from a downstream device will have the minimum time band applied regardless of setting, this is sometimes referred to as the maximum unrestrained delay.

When the instantaneous function is disabled, a short-time delay override is used to instantaneously trip circuit breakers in the event of a significant short circuit. This is called the short-time withstand rating and is represented on the trip curve as an absolute ampere value.

Like the long-time function, the ground fault (G) element consists of a pickup and delay setting. When a phase-to-ground fault occurs, the sum of the phase currents are no longer be equal because the ground fault current returns through the ground bus. In a 4-wire system a fourth CT is installed on the neutral bus to detect this imbalance. 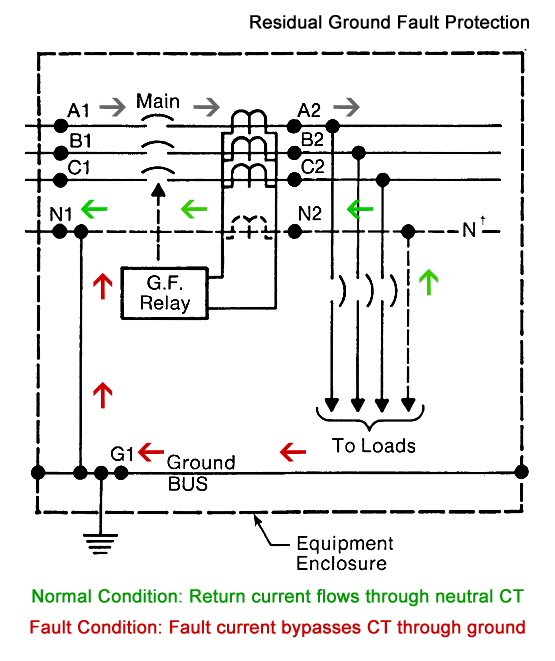 Use of the manufacturer's test kit or rewiring the neutral CT input is the preferred method of primary-injection testing on a low voltage circuit breaker with ground fault protection, otherwise two poles can be connected in series to provide balanced secondary currents to the trip unit.

Time-current curves are essential for the proper coordination of circuit breakers. In the event of a fault, only the circuit breaker closest to the fault should operate, leaving other circuits unaffected. 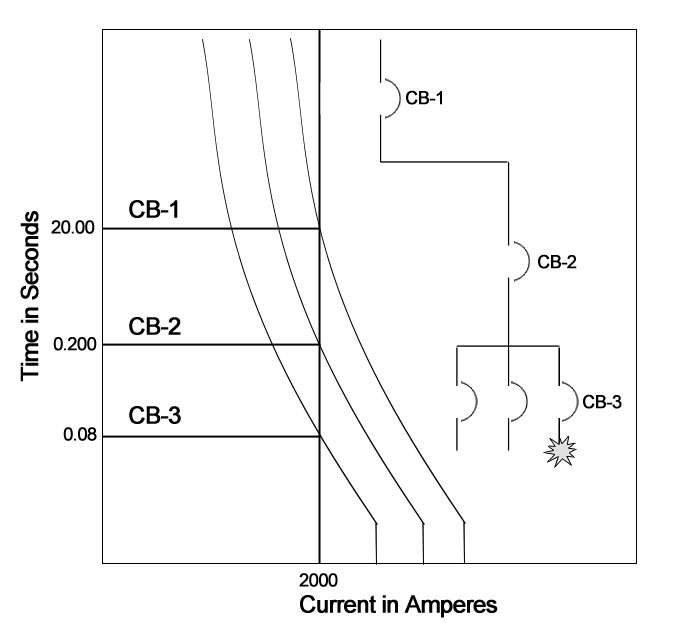 If the fault occurs downstream of breaker CB-3 it will trip first and clear the fault. Circuit breakers CB-2 and CB-1 will continue to provide power to the circuit.

Each function of the trip unit should also be coordinated to prevent nuisance trips. If a circuit breaker is feeding a piece of equipment with large inrush currents for example, the instantaneous pickup value should be set higher than the short time pickup value to prevent tripping when the equipment is energized.