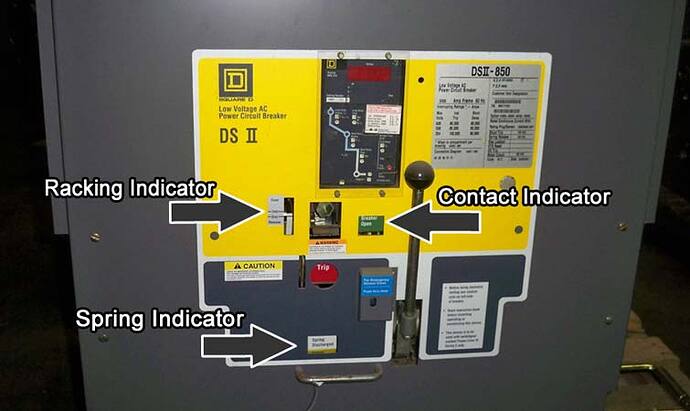 Draw out circuit breakers are equipped with three important flags that indicate the operating state of an electrical circuit. Thorough knowledge of these indications and their associated assembly is critical in order to correctly operate and maintain circuit breakers.

The important controls and indicators are grouped on the front of the breaker by function. Each flag represents a separate mechanism that controls the installation, connection, or removal of the circuit breaker.

There are three main indications associated with draw-out breakers that every qualified person must know:

Unlike bolt-in circuit breakers, draw-out breakers are designed to mount on extension rails and are equipped with racking mechanisms for easy interchangeability. These circuit breakers have 4 racking positions: 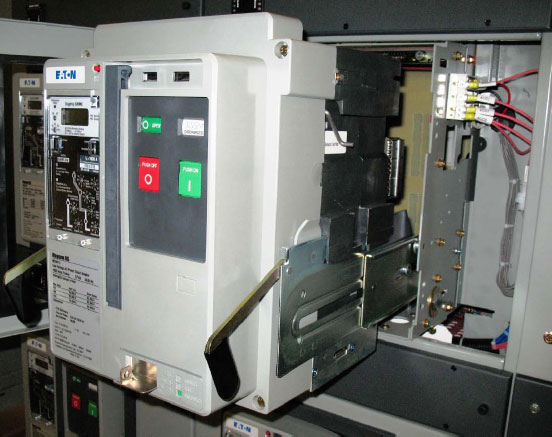 Draw-out breakers are designed to mount on extension rails and are equipped with racking mechanisms for easy interchangeability. Photo: EATON

Note: Racking mechanisms are sometimes referred to as “levering” mechanisms. Racking a circuit breaker, whether in or out, presents the greatest arc flash risk to personnel.

Power circuit breakers are equipped with a two-step stored energy mechanism to facilitate the opening or closing of the main contacts by stretching or compressing powerful springs.

The two-step stored energy process allows for an open-close-open duty cycle, which is achieved by storing charged energy in a separate closing spring. The spring indicator has two positions:

Circuit breaker position indicators755×450 35.2 KB
The important controls and indicators are grouped on the front of the breaker by function. Photo: EMSCO.

Each circuit breaker primary moving contact assembly is comprised of multiple individual copper contact fingers connected to the load conductor through a pivoted or flexible connection. The number of fingers used depends upon the breaker’s continuous and short-circuit current ratings.

There are three positions for the primary contacts: