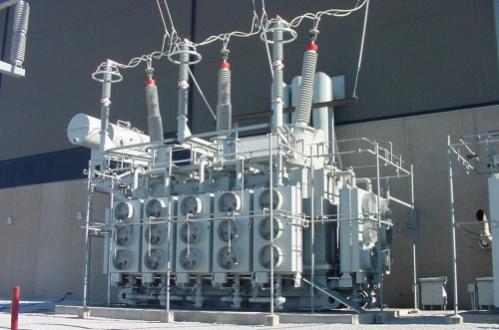 The cooling classification of a transformer, expressed in letters, designate the type cooling system used.

Heat is one of the leading causes of transformer failure. The main source of heat generation in transformers are caused by copper loss in the windings and core (I²R losses).

If heat inside of a transformer is not properly dissipated, the temperature of the transformer will rise continually, which may damage the insulation.

A transformer operating at just 10°C above its rating will reduce its life by 50%. It is easy to see why it is imperative to understand how transformers are cooled, and how to detect problems in their cooling systems.

Transformers may have multiple load ratings that correspond to multiple stages of cooling.

Dry-type transformers feature coils in open air and depend primarily on convection currents created by the heat of the transformer to create an air flow across the coils to stay cool.

Louvers or screened openings are used to direct the flow of cool air across the transformer coils. Fans are often be used to force circulation of air through the case.

It is important to keep dry-type transformer enclosures clean and the area around them clear. Items placed near or against the transformer will restrict the heat transfer around the enclosure.

As dirt accumulates on cooling surfaces, it becomes more and more difficult for air around the transformer to remove heat. As a result, over time, the transformer temperature slowly rises unnoticed, reducing service life.

Cooling classes of dry type transformers are covered by ANSI/IEEE standard C57.12.01. Below is a summary of some common examples:

Ventilated, self-cooled transformers. These transformers have ventilation ports located in outside walls of the enclosure.

There are no fans to force air into and out of the enclosure with typically no external fins or radiators. Cooler air enters the lower ports, is heated as it rises past windings, and exits the upper ventilation ports.

Ventilated, self-cooled (same as Class AA). These transformers have a fan or fans providing additional forced-air cooling. Fans may be wired to start automatically when the temperature reaches a pre-set value.

These transformers generally have a dual load rating, one for AA (self-cooling natural air flow) and a larger load rating for FA (forced air flow).

Self-cooled (A), non-ventilated (NV). These transformers have no ventilation ports or fans on the enclosure and is not sealed to exclude migration of outside air, but there are no provisions to intentionally allow outside air to enter and exit.

Cooling is by natural circulation of air around the enclosure. This transformer may have some type of fins attached outside the enclosure to increase surface area for additional cooling.

Sealed with internal gas (G) and self-cooled (A). These transformers typically have a gas, such as nitrogen, SF6, or freon, to provide high dielectric and good heat removal.

Cooling occurs by natural circulation of air around the outside of the enclosure. There are no fans to circulate cooling air; however, there may be fins attached to the outside to aid in cooling.

The enclosure is hermetically sealed to prevent leakage.

Liquid filled transformers have coils immersed in an insulating medium, usually oil, which serves as both an insulator and provides a good medium through which to remove excess heat.

As transformer oil deteriorates through aging and moisture ingress, transformer oil samples should be periodically drawn and analyzed in accordance with ASTM insulating oil test methods.

First Letter: Internal cooling medium in contact with the windings

Below, we look at some examples of modern liquid transformer cooling classes along with their designations prior to ANSI/IEEE C57.12.00-2000:

Transformer windings and core are immersed in some type of oil and are self-cooled by natural circulation of air around the outside enclosure. Fins or radiators may be attached to the enclosure to aid in cooling.

Same as OA, with the addition of fans. Fans are usually mounted on radiators. The transformer typically has two load ratings, one with the fans off (OA) and a larger rating with fans operating (FA). Fans may be wired to start automatically at a pre-set temperature.

Same as OA/FA with an additional set of fans. There typically will be three load ratings corresponding to each increment of cooling.

Increased ratings are obtained by increasing cooling air over portions of the cooling surfaces. Typically, there are radiators attached to the tank to aid in cooling.

The two groups of fans may be wired to start automatically at pre-set levels as temperature increases. There are no oil pumps. Oil flow through the transformer windings is by the natural principle of convection.

Windings and core are immersed in some type of oil. This transformer typically has radiators attached to the enclosure.

The transformer has three load ratings corresponding to each cooling step. Fans and pumps may be wired to start automatically at pre-set levels as temperature increases.

Windings and core are immersed in some type of oil. This transformer typically has radiators attached to the enclosure.

The transformer has three load ratings corresponding to each cooling step. Fans and pumps may be wired to start automatically at pre-set levels as temperature increases.

Transformer coil and core are immersed in oil.

Typically a oil/water heat exchanger (radiator) is attached to the outside of the tank. Cooling water is pumped through the heat exchanger, but the oil flows only by natural circulation.

As oil is heated by the windings, it rises to the top and exits through piping to the radiator. As it is cooled, the oil descends through the radiator and re-enters the transformer tank at the bottom.

Transformer coil and core are immersed in oil. This transformer has two ratings.

Cooling for one rating (OW) is obtained as previously described. The self cooled rating (A) is obtained by Natural Circulation of air over the tank and cooling surfaces.

This transformer normally has only one rating. The transformer is cooled by pumping oil (forced oil) through a radiator normally attached to the outside of the tank. Also, air is forced by fans over the cooling surface.