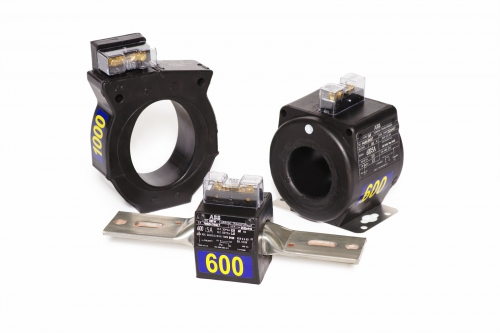 It is essential to inspect and test current transformers and their connected instruments at regular intervals. Photo Credit: ABB

Current transformers play an important role in the monitoring and protection of electrical power systems. CT's are instrument transformers used for converting primary current into a reduced secondary current for use with meters, relays, control equipment and other instruments.

The importance of instrument transformer tests is often underestimated. Current transformers for metering purposes must have a high degree of accuracy to ensure precise billing while those used for protection must react quickly and correctly in the event of a fault.

Risks such as confusing instrument transformers for metering and protection, or mixing up connections can be reduced significantly by testing before initial use. At the same time, electrical changes in a CT, caused for example by aging insulation, can be identified at an early stage.

For these reasons and more, it is essential to inspect and calibrate current transformers and their connected instruments at regular intervals. There are 6 electrical tests that should be performed on CT's to ensure accuracy and optimal service reliability:

Unlike the voltage or power transformer, the current transformer consists of only one or very few turns as its primary winding. This primary winding can be of either a single flat turn, a coil of heavy duty wire wrapped around the core or just a conductor or bus bar placed through a central hole. 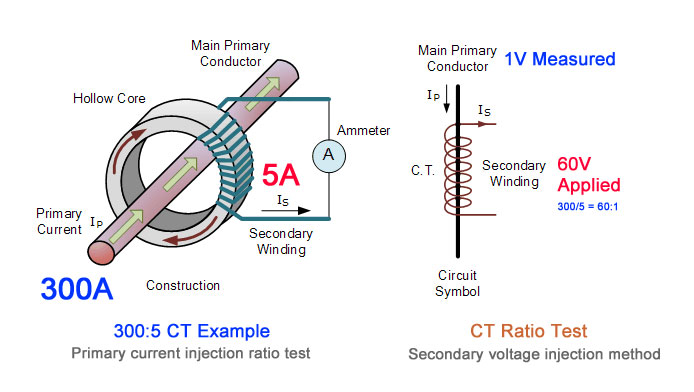 The ratio test is conducted to prove that the ratio of the CT is as specified, and to verify the ratio is correct at different taps of a multi tap CT. The turn's ratio is equivalent to the voltage ratio of potential transformers and can be expressed as follows:

Ratio tests are performed by applying a suitable voltage (below saturation) to the secondary of the CT under test while the primary side voltage is measured to calculate the turns ratio from the expression above.

DANGER: Use caution when conducting a CT ratio test and DO NOT apply a voltage high enough that would cause the transformer to saturate. Applying a saturation voltage will result in readings that won't be accurate.

The polarity of a CT is determined by the direction in which the coils are wound around the transformer core (clockwise or counterclockwise) and by how the leads are brought out of the CT case. All current transformers are subtractive polarity and should have the following designations to visually identify the direction of current flow: 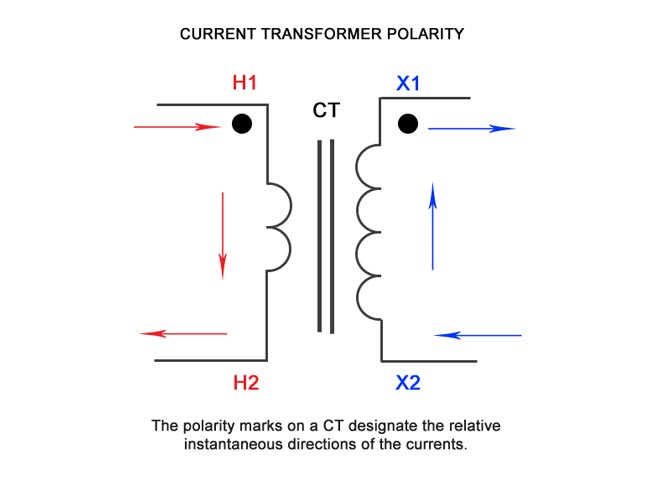 A CT under test is assumed to have correct polarity if instantaneous current direction for primary and secondary current is opposite to each other. Photo: TestGuy.

The polarity marks on a CT designate the relative instantaneous directions of the currents. The polarity test proves that the predicted direction of secondary CT current (leaving) is correct for a given direction of primary current (entering).

Taking care to observe proper polarity is important when installing and connecting current transformer to power metering and protective relays. At the same instant of time, that the primary current is entering the primary terminal the corresponding secondary current should be leaving the similarly marked secondary terminal.

A CT under test is assumed to have correct polarity if instantaneous current direction for primary and secondary current is opposite to each other. CT Polarity is critical when CT's are being used together in single-phase or three-phase applications.

Most modern day CT test equipment is capable of performing the ratio test automatically using a simplified test lead setup and will display polarity as correct or incorrect. CT polarity is verified manually by utilizing a 9V battery and analog voltmeter with the following test procedure: 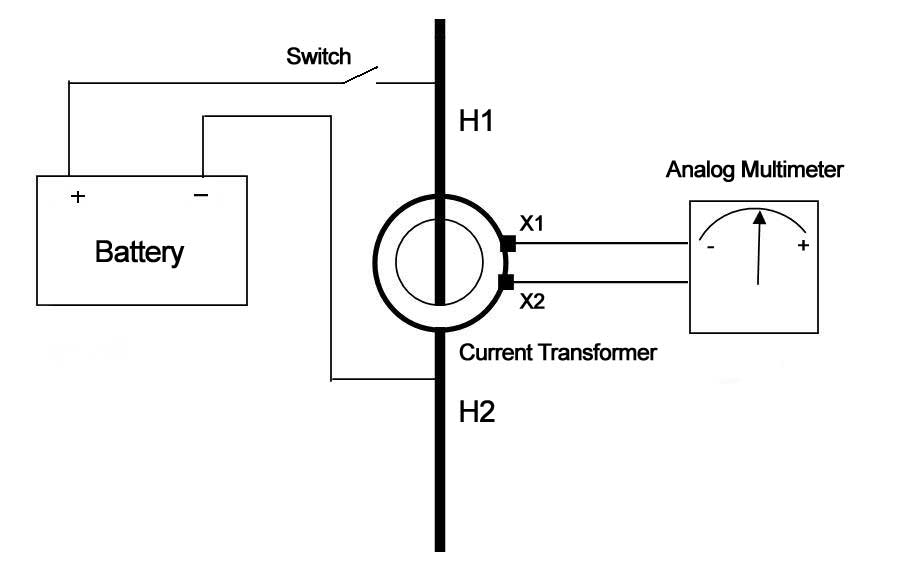 Markings on current transformers have been occasionally misapplied by the factory. You can verify the polarity of a CT in the field with a 9V battery. Photo: TestGuy.

When a CT is "saturated", the magnetic path inside the CT operates like a short circuit on the transmission line. Almost all of the energy supplied by the primary winding is shunted away from the secondary winding and is used create a magnetic field inside the CT.

Saturation testing for a current transformer identifies the rated knee point against IEEE or IEC standards, the point at which the transformer is no longer able to output current in proportion to its specified ratio.

Excitation tests are performed by applying an AC voltage to the secondary winding of the CT and increasing the voltage in steps until the CT is in saturation. The "Knee" point is determined by observing a small voltage increase causing a large increase in current.

The test voltage is slowly decreased to zero to de‐magnetize the CT. The test results are plotted on a logarithmic (log‐log) graph and evaluated based on the transition period between normal operation and saturation.

Excitation tests are performed by applying an AC voltage to the secondary winding of the CT and increasing the voltage in steps until the CT is in saturation. Photo: TestGuy.

The excitation curve around the points where current jumps up for a small increase of voltage; is very important for comparison of curves with published curves or similar CT curves. The excitation test results should be compared with published manufacturer's data or previous recordings to determine any deviations from previously obtained curves.

IEEE defines the saturation as "the point where the tangent is at 45 degrees to the secondary exciting amperes". Also known as "knee" point. This test verifies that the CT is of correct accuracy rating, has no shorted turns in the CT and no short circuits are present in the primary or secondary windings of the CT under test.

The insulation between the current transformer windings and windings to ground should be checked for dielectric strength while performing a comprehensive CT test. Three tests are performed to determine the condition of the insulation of the CT under test:

Remove the neutral ground and isolate the CT from any associated burden. After the windings are shorted, the CT will be a three terminal specimen. 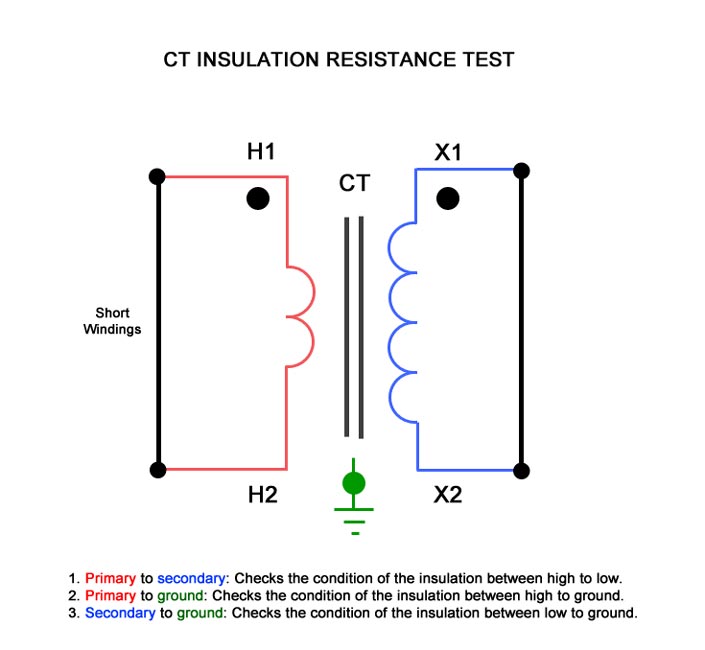 Insulation resistance test values for CT's should be compared with similar readings obtained with previous tests. Any large deviation in historical readings should call for further investigation.

The minimum insulation resistance that is generally accepted is 1 Megohm. Any reading in Megohms is considered to be a good insulation, however, it's the trending of insulation test results that gives the true condition of CT insulation.

Insulation readings are greatly affected by the specimen temperature. Should a reading be compared to previously taken readings, proper correction factors need to be applied, if taken under different temperature conditions before drawing any conclusion. 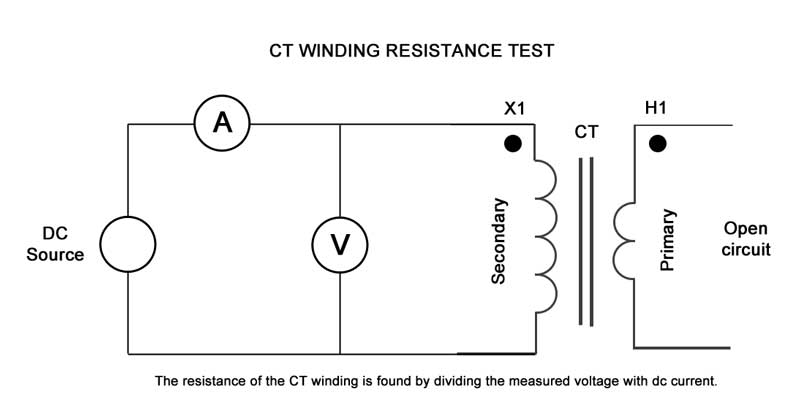 Measure CT winding resistance by passing a DC current through the winding and measure the voltage drop. Divide the measured voltage by the measured current. Photo: TestGuy.

Tip: Run a saturation test to demagnetize the CT at the completion of all winding resistance tests.

The burden of a current transformer can be defined as the total impedance in ohms on the secondary output terminals. The total burden is a combination of impedance offered by watt-hour meter coils, relay current coils, contact resistance, terminal blocks, wire resistance and test switches used in the secondary loop.

Each current transformer has a secondary burden when connected in a relay or metering circuit. CT's are expected to provide the secondary output current based upon their accuracy class.

If a current transformer is not properly sized based upon secondary loop burden, it may result in a decrease in CT secondary current. Burden testing is important to verify that CT is supplying current to a circuit that does not exceed its burden rating.

The burden test is also useful in ensuring that the CTs are:

Measure burden by injecting the rated secondary current of the CT from its terminals towards load side by isolating the CT secondary with all connected load, and observe the voltage drop across the injection points - and at every point of the circuit to ground.

This method is time consuming, but only requires a voltage source, a resistance, and a voltmeter. Measuring the voltage drop at the source combined with ohms law will give us the burden impedance. Analyzing the voltage drop patterns throughout the circuit confirms the wiring is correct.

Current transformer burdens are typically expressed in VA. The burden test is performed to verify that the CT is capable of supplying a known current into a known burden while maintaining its stated accuracy. A burden test is typically performed at full rated secondary current value (ex. 5A or 1A).

How to calculate CT Burden

Depending on their accuracy class, current transformers are divided into two groups: Metering and Protection (Relay). A CT can have burden ratings for both groups.

Metering CT's are typically specified as 0.2 B 0.5

The last number specifies the Burden in ohms. For a CT with secondary current of 5 A the VA burden rating can be calculated as:

Burden in VA can be specified as: