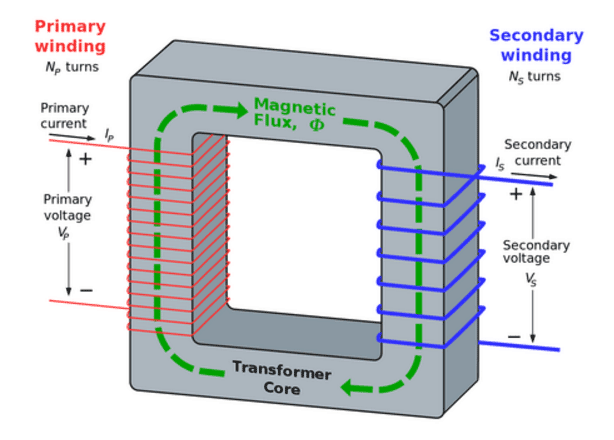 When the primary winding of a transformer is energized with an alternating current (AC), alternating magnetic lines of force, called “flux,” circulates through the core, establishing a magnetic field. Photo: Quora

A secondary coil with twice as many turns as the primary will be cut twice as many times by the magnetic flux, and twice the applied primary voltage will be induced in the secondary. This transformer is known as a step-up transformer.

How TTR is Calculated

If the primary current is 20 amps, what will the secondary current be?

As voltage is stepped up, the current is stepped down, keeping volts multiplied by amps constant. This is referred to as "volt amps."

Calculate the ratio of each three-phase winding based on the line to neutral voltage of the wye winding. Divide the line-to-line winding voltage by 1.732 to obtain the correct line-to-neutral voltage.

Check the tap changer position to make sure it is set where the nameplate voltage is based. Otherwise, the turns ratio test information cannot be compared with the nameplate.

How TTR is Measured

The turns ratio test is capable of detecting shorted turns in the winding, which indicate insulation failure by determining if the correct turns ratio exists. Shorted turns may result from short circuits or dielectric failures.

The ratio obtained from the field test should fall within 0.5%, or whichever the manufacturer specifies.

New transformers of good quality normally compare to the nameplate within 0.1%. For three-phase delta/wye or wye/delta connected transformers, a three-phase equivalency test should be performed. The test is performed and calculated across corresponding single windings.